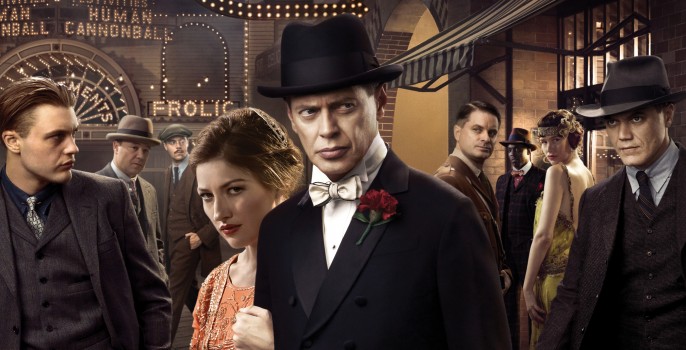 Heat is on for Boardwalk Empire band

on October 1 | in Culture, Vintage | by Boo Paterson | with 1 Comment

The award-winning bandleader from Boardwalk Empire has told how appearing on the show is like being in a sauna – with all your clothes on.

The hit HBO series, which is now in its fifth and final season, stars Steve Buscemi as the anti-hero bootlegger Nucky Thomson, who is trying to stay alive as his adversaries aim to increase their share of the spoils.

And it’s not just the lead who feels the heat. Vince Giordano – who, along with his band The Nighthawks, won a Grammy for the show’s soundtrack – described how the conditions on set can be very uncomfortable. 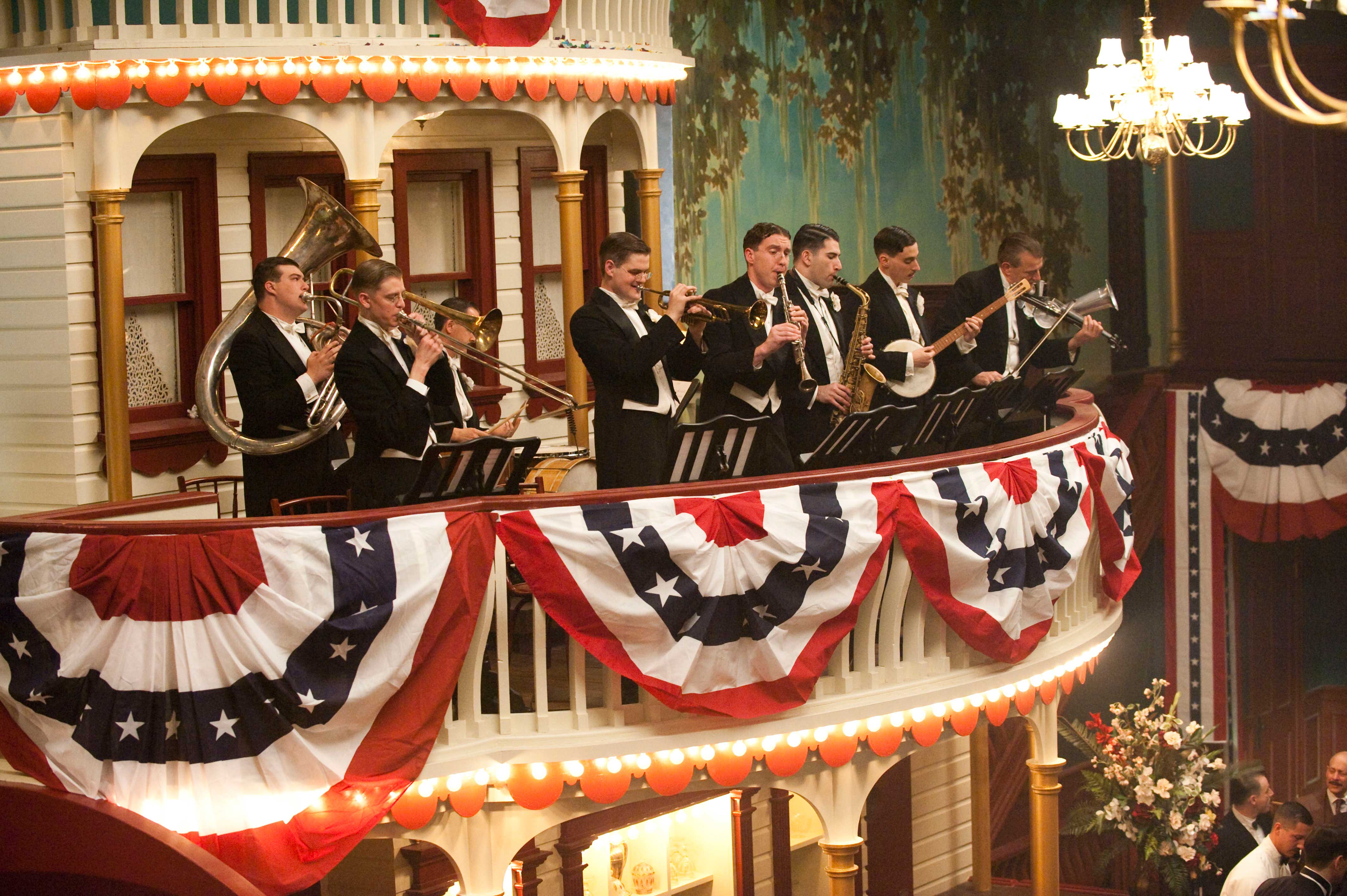 HOT JAZZ…the musicians were overwhelmed by the heat on set. Pic by Abbot Genser/HBO

“In the early days we were the house band at Babette’s,” says Vince. “We were up on the balcony in the club and, as you know, hot air rises.

“With the stage lights on us, the old 1920s tuxedoes that we had to wear, the smoke coming out of the smoke machines, and people smoking cigarettes, it was a very trying experience.

“You’re kinda whipped by the end of it. It’s like being in a sauna with all your clothes on.

“The first day that we were working with the director Martin Scorsese, we were there from noon to 5.30am. We were bushed – sleeping on chairs, sleeping on tables – and make-up had a hard time getting us to look fresh. But that’s what it takes to make a film.” 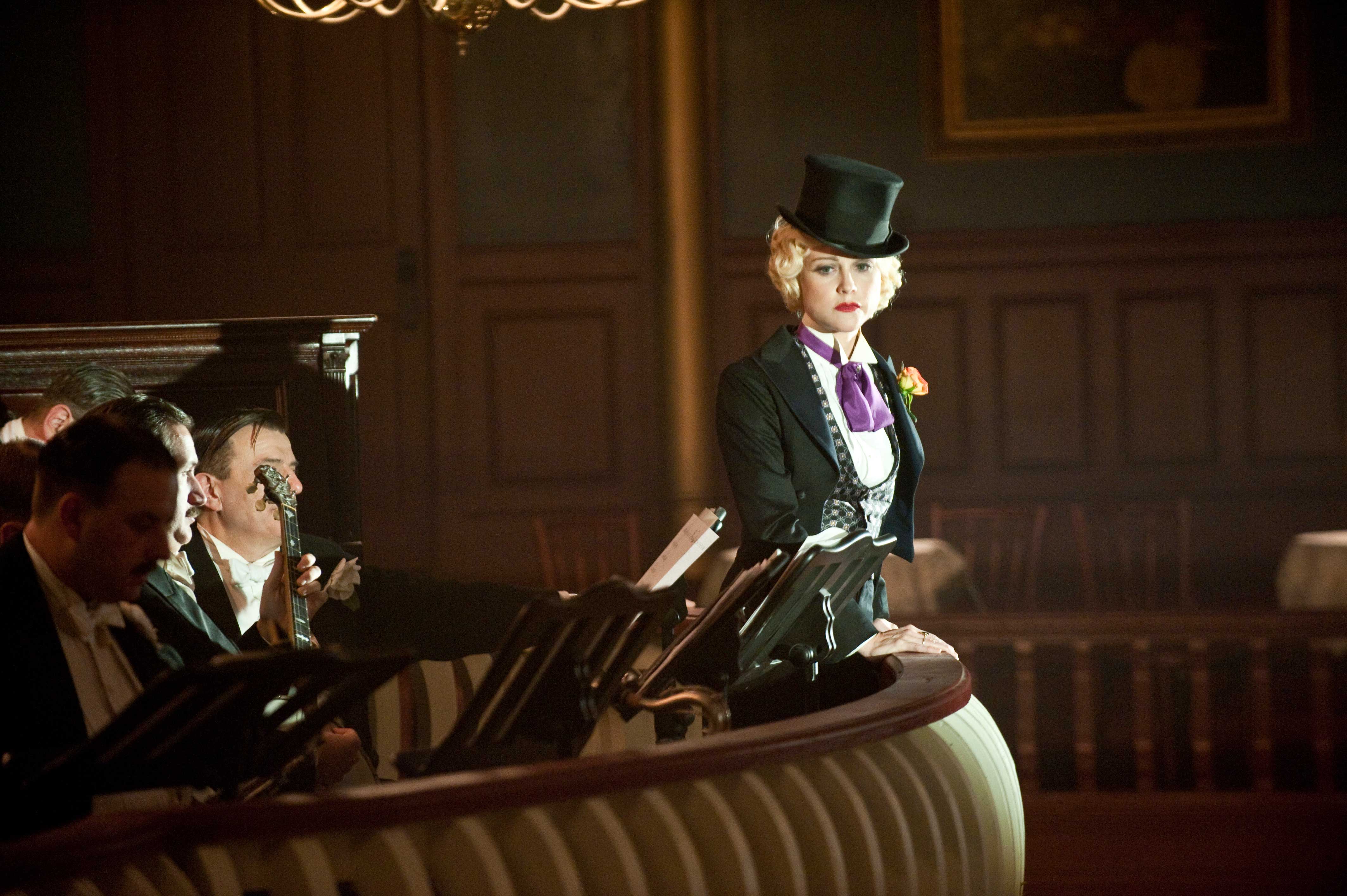 GAZE…Babette watches over the club from the bandstand. Pic by Abbot Genser/HBO

The Nighthawks have been on every single Boardwalk Empire soundtrack, with Vince being asked by producers to transcribe the music, or adapt existing arrangements, of The Original Dixieland Jazz Band, which was one of the hottest bands of the 20s.

Vince was more than familiar with their repertoire, as he has been listening to early jazz since the age of five, amassing an astonishing collection of over 60,000 scores and 34,000 pieces of sheet music, which is thought to be the biggest in the world in private hands.

For each live gig that he does with the 11-piece Nighthawks, he has to carry a back-breaking 400lbs of music, a sound system, his tuba, string bass and bass sax, stand lights, music stands, a drum kit, and small vibra-harp, a phono-fiddle, and sometimes two baritone saxes. 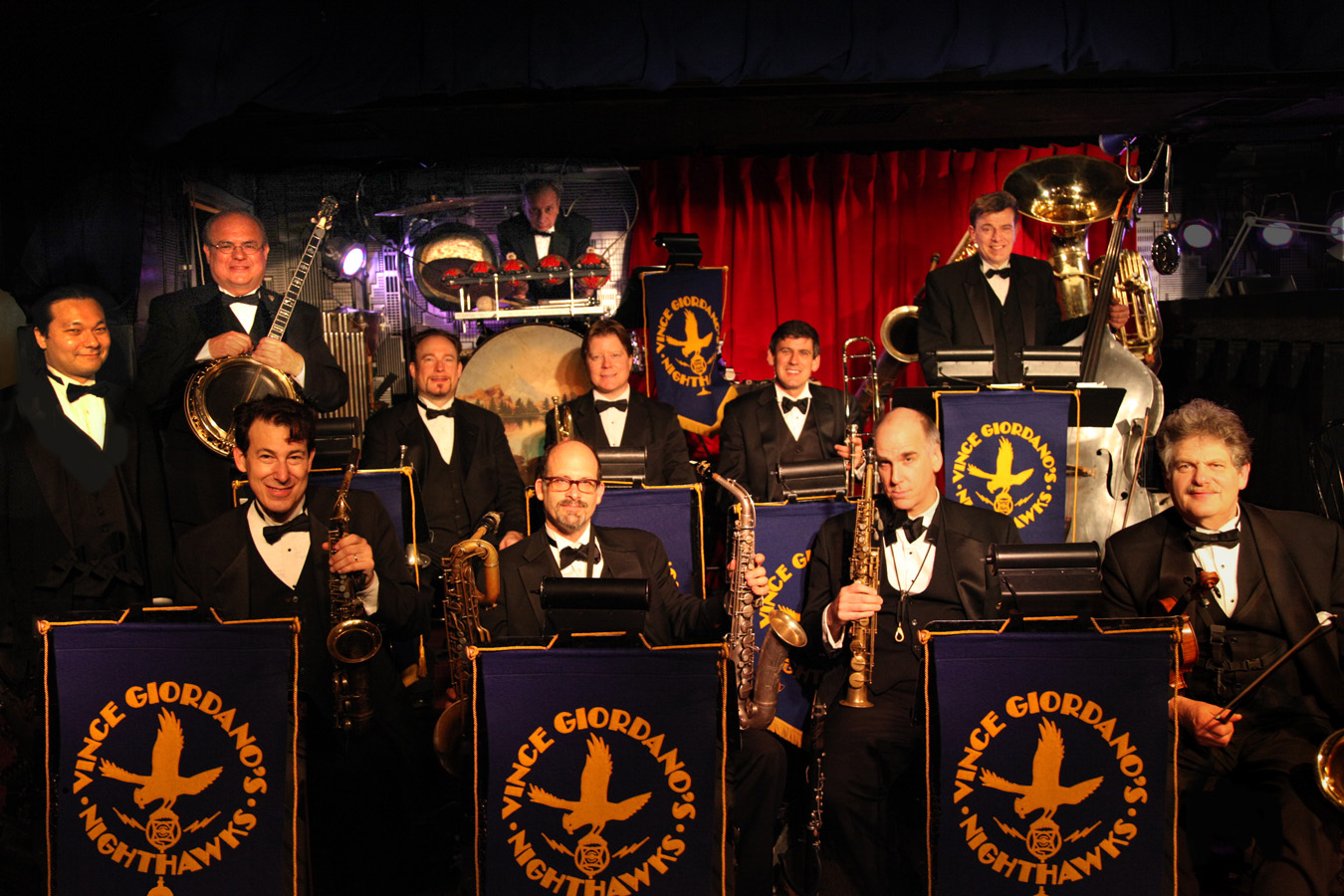 BAND…the Nighthawks play at Iguana in NYC every week

He plays with the Nighthawks every Monday and Tuesday in New York at Iguana, and his love of music is never more evident than when he’s performing – he smiles through every song and clearly adores playing the three big instruments he’s mastered; the string bass, tuba and bass sax.

So being asked not to play – to mime – was something of a privation when he and the band were asked to do so for Boardwalk Empire.

He says: “We were up there on the platform mimicking what we recorded, as they’re trying to capture the dialog as cleanly as possible.

“Some of the guys found it frustrating because they did not want anyone to make any noises on their instrument. We either had the music coming in on monitor speakers or in little earphone jacks. 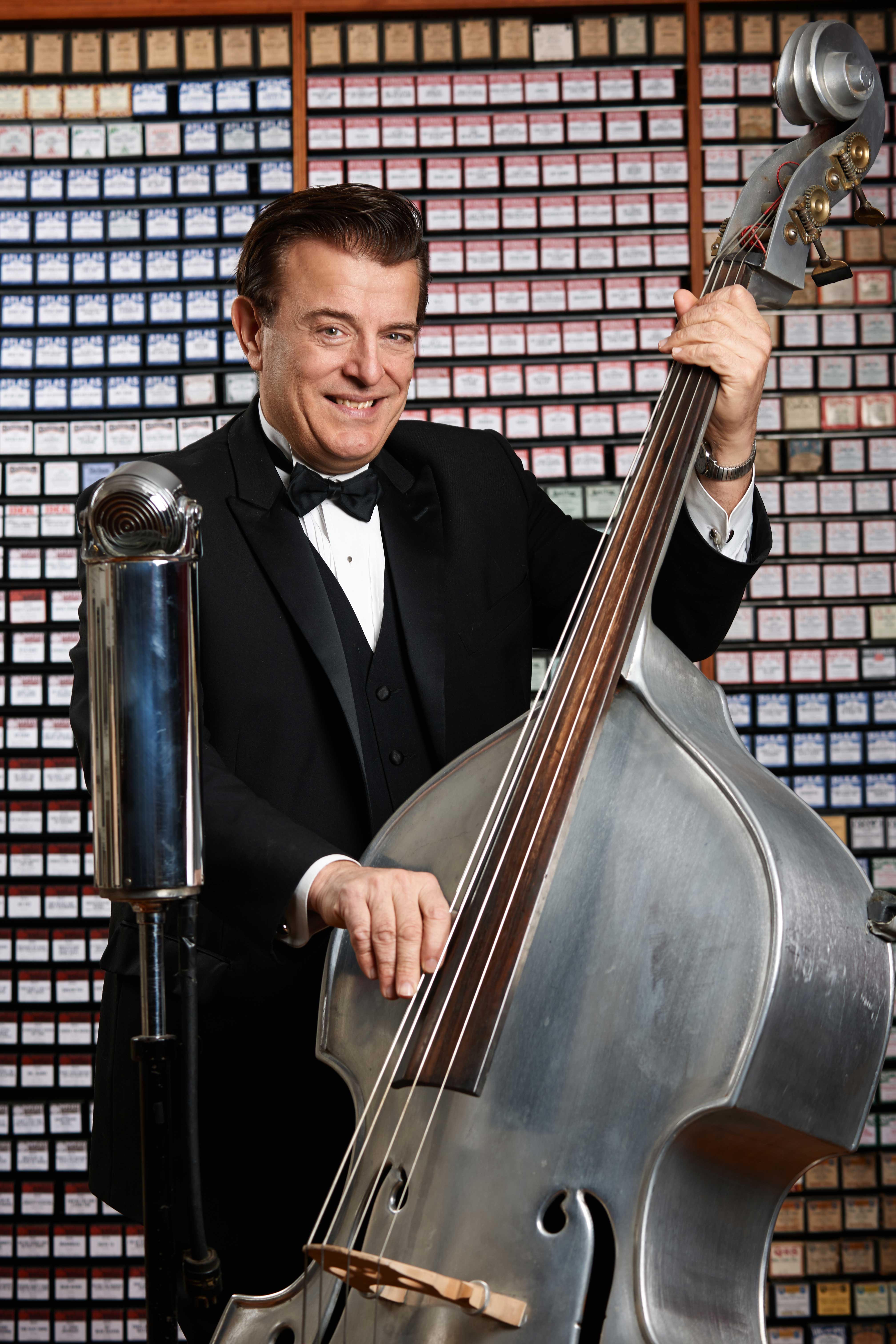 “We had to keep it animated and convincing. You keep going over and over the same section of music, or you have different camera angles and sometimes you’re in the scene sometimes you’re not, but you always have to be ‘on’.

“Having real musicians helped and we had the scores to look at so we knew exactly what we recorded in the studio weeks before.”

Born in Brooklyn, Vince is an experienced movie musician and actor, having appeared in such films as The Cotton Club, The Aviator, and Public Enemies, among many others. But one particular scene in Boardwalk Empire, where Jimmy Darmody gets angry with a knuckle-head called Doyle, left him shocked.

He explains: “There was a scene when one of the actors pushes another one off the balcony on to this table. It was a big drop, so they hired a stuntman to do this. 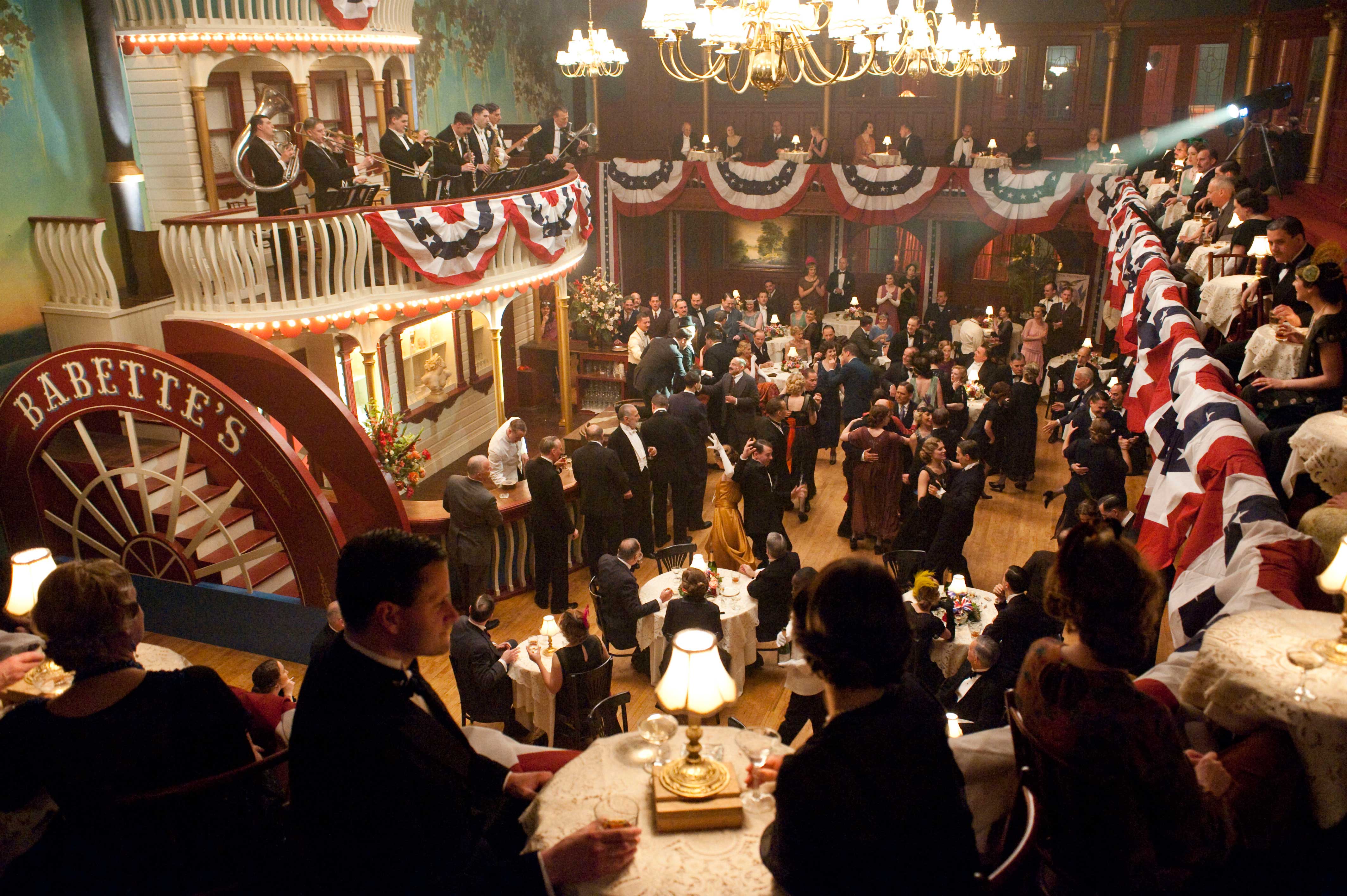 “So there are all of these people sitting round the table like they’re eating and all of a sudden they have this actor crashing on the table, which collapses, and all this fake food – rubber lobsters and salads made out of confetti – everything goes flying.

“They did this six times with different angles and takes. And this guy just keeps on falling off the balcony crashing into the table. It was kinda scary – if that fella would have fallen a couple of inches either way, he would have just crashed on to one of the people eating.”

Vince has been involved in every series of Boardwalk as musician, bandleader, transcription arranger and actor – right up to this final one, which features a lot of Cuban music, as Nucky tries to set up a deal with Bacardi in Havana.

“We appeared in the first three seasons and then they bombed the club we worked in…so I guess we were killed off,” says Vince.

“But we are still doing music for Boardwalk in this season – we’ve moved the dates up to 1931. I wrote all the charts for Chalky’s club and the Cuban music too. Pretty much all of the vintage popular and jazz tracks are done by the Nighthawks.”

And even with the long, uncomfortable days, Vince is still delighted to be a part of the Boardwalk phenomenon.

“My favorite aspect of the filming was just being there, hearing the music, seeing people dance and the actors getting into it, and knowing this show was going to be seen by millions who would be exposed to this culture and music of the 1920s; it’s being part of history”

Pin It
» Culture, Vintage » Heat is on for Boardwalk Empire band