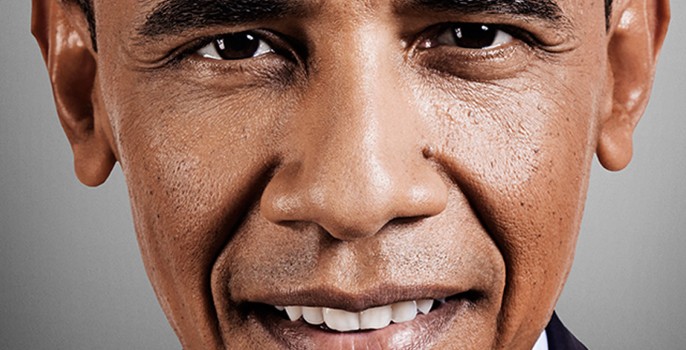 The man who shot the President

on March 11 | in Culture | by Boo Paterson | with No Comments

But then the President’s people called, and that was a whole different ball game. Especially when one of their requests was that he mustn’t make Obama look like the Devil.

Mark explains: “I was doing the 80th anniversary edition of Esquire Magazine and the brief was to photograph 80 men, aged one through 80. Obama is 52 and I really wanted to photograph him – there have only been seven photographers in the world who’ve done a portrait session with him.

“The White House wouldn’t commit to a yes or no, so we took a picture of our second choice for a 52 year old, Woody Harrleson, and were delighted with the shot, and Obama went to the back of our minds.”

Then three weeks before Esquire’s deadline, the White House said that the President wanted to do the photo, and the magazine’s editors decided to dedicate part of the issue to him alone and keep Woody Harrelson at No.52.

Mark says: “We very quickly had a date set and the next day the caller ID flashes up on my phone saying  ‘White House’, which was totally surreal.

“An assistant asked me what I would do and how long I would need. I knew from experience that I needed about 15 mins, but she gave me 12 and I ended up with four.”

It was then that Satan came into the conversation. 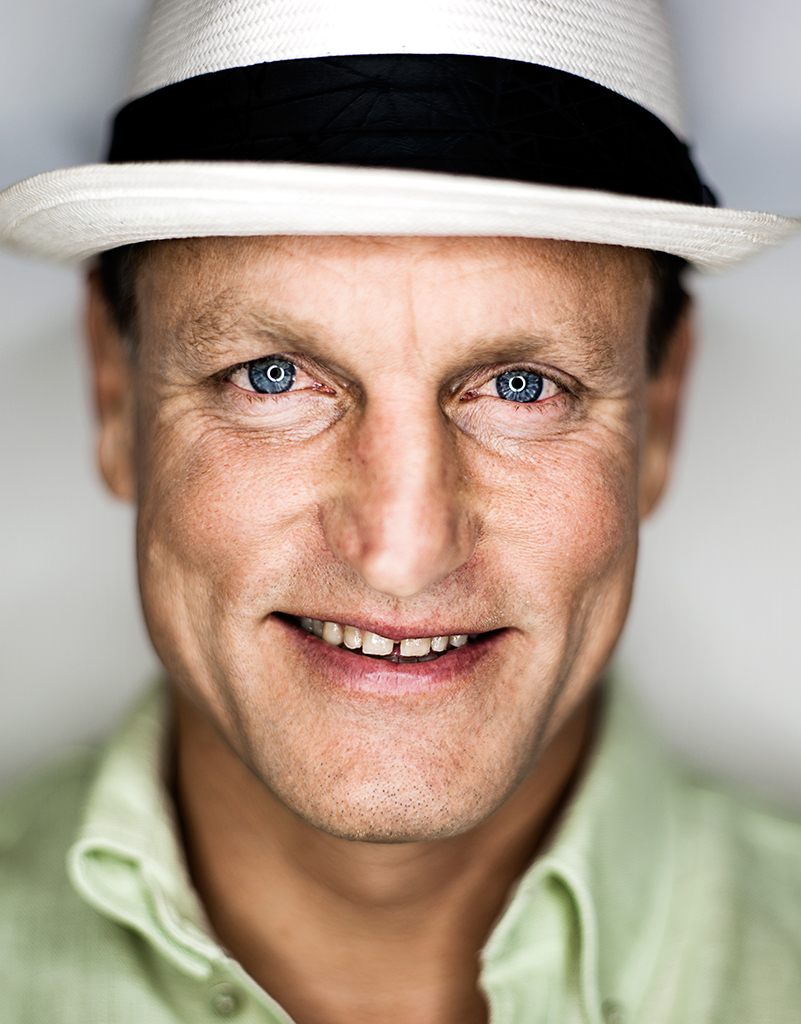 Mark explains: “One thing I was using with this project was a ring light, which gives an even light, and I wanted to photograph every person in the same light so you could see the progression of age and experience from one man to the next.

“But the ring light leaves two rings in the eyes and President Obama’s people said we couldn’t use it because they were concerned his detractors may say he was the Devil.

“Very sadly this is the most controversial president that America has ever had and he’s received more death threats than any other president. I think his press officers are incredibly aware of how things can be used in the wrong context. And I think when you’re dealing with crazies the whole time, which they are, you become a little crazy yourself.”

Mark agreed not to use the ring light and got a date for the shoot in the White House.

He said: “I had about four days to get nervous. But because I’ve been doing this a long time, I don’t allow myself to fall apart completely – for it to be real – until after it’s finished.” 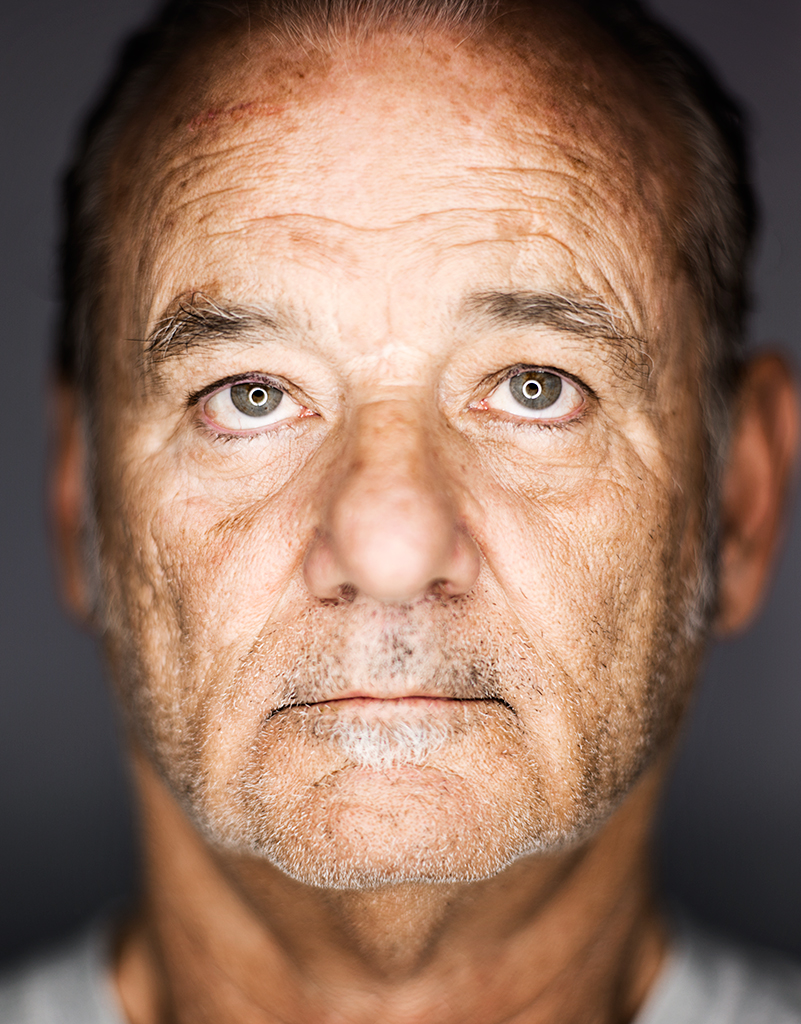 Mark and his assistant Esteban, Esquire’s creative director David Curcurito, and senior editor Mark Warren all travelled to Washington for the shoot and were hyped up with excitement and nerves on the big day.

He says: “We’re all dressed up in our sharp suits. I have my wee bow tie on. They didn’t tell us to dress up, but it’s the President of the United States, the leader of the free world; I don’t want him thinking ‘why are you dressed as an idiot?’

“We were told we had to be at a certain gate at 8.30am to photograph him at 11, to allow plenty of time to get through security.

“So we’re all ready to go and jagged with adrenaline. Then I get an email saying ‘the President is running late, please arrive at 11.30am’. We’re sitting there in our great outfits and now have three hours to kill.” 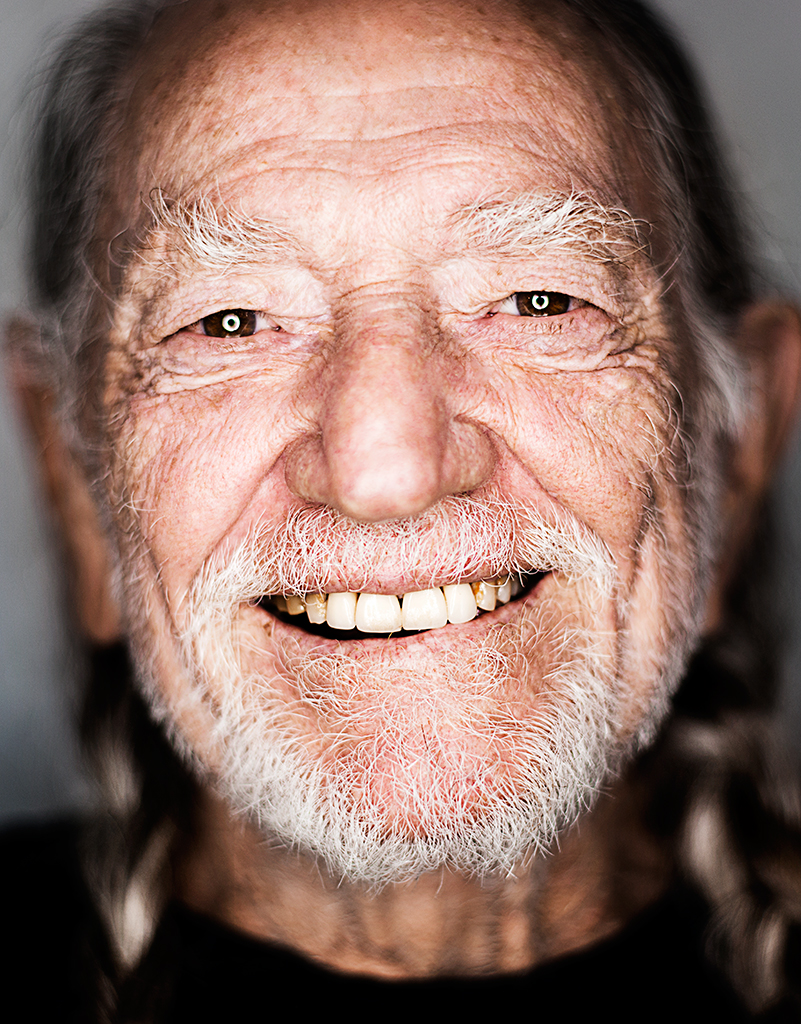 When the hour finally arrived, Mark found he had a problem: it was 100 degrees and they couldn’t drive the car with all their equipment right up to the White House.

Mark says: “On a job like that I would normally have two assistants, but I was only allowed to take one, and I have a lot of gear. Even though we have a trolley, it’s still really heavy.

“So we’re pushing the cart up to the White House and – because of all the adrenaline – we’re trying to rush, even though we’re really early.

“I suddenly realise I do no want to be a sweaty wreck when I meet the President, so I say to Esteban ‘We’re walking slowly…just walk slowly – there’s no need to sweat.

“We finally lug all the stuff to the gate and we weren’t really sure what to say – it’s the President’s house. So David stepped forward and said ‘we’re from Esquire Magazine’ and they said ‘and you’re here to see?’… ‘um, the President’.” 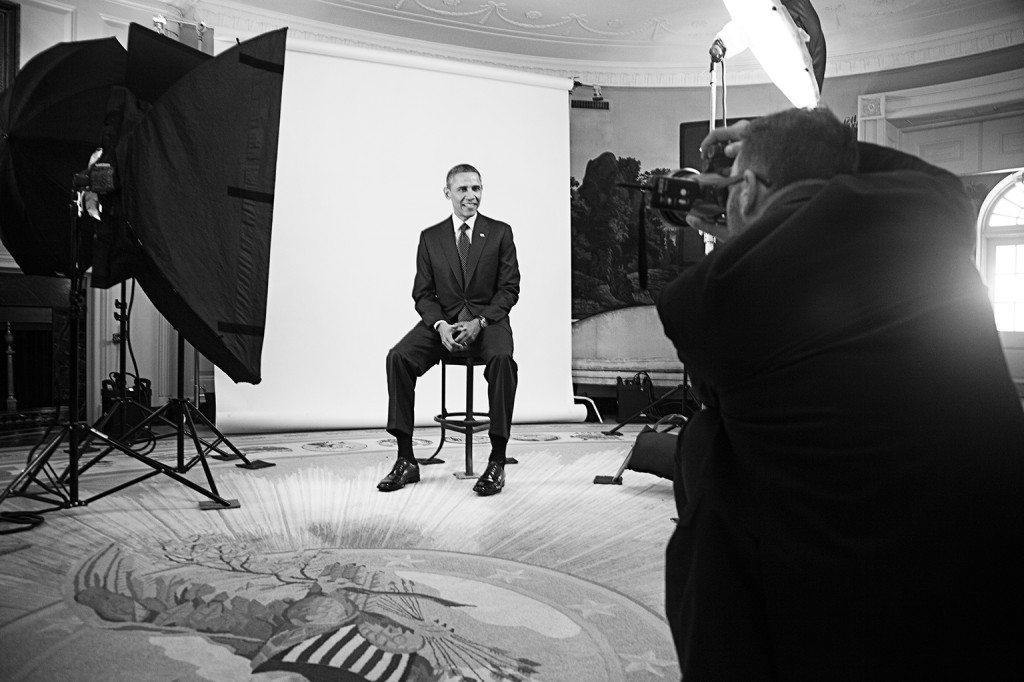 IN ACTION… Mark shoots the President against white backdrop

With around 10 cases, Mark was told to open them up, where they went through various checks, involving a metal detector, sniffer dogs and secret service officers.

Mark says: “And I cannot tell you how nice that whole team was at the gatehouse. It’s like going through airport security … if everyone really respected you at airport security. They have such integrity and respect and professionalism.”

Mark says: “As we’re led down a corridor there are secret service men further along, mumbling into their radios. They say to our guide ‘pull them off to the left, the First Lady’s coming through’. We make a sudden detour through a kitchen, so the First Lady can pass without seeing us, then end up in the circular Diplomatic Room in the middle of the house.

As Mark and Esteban set up their equipment under the hawk-eyed gaze of two secret service men and a handful of other White House staff, the countdown slowly began. 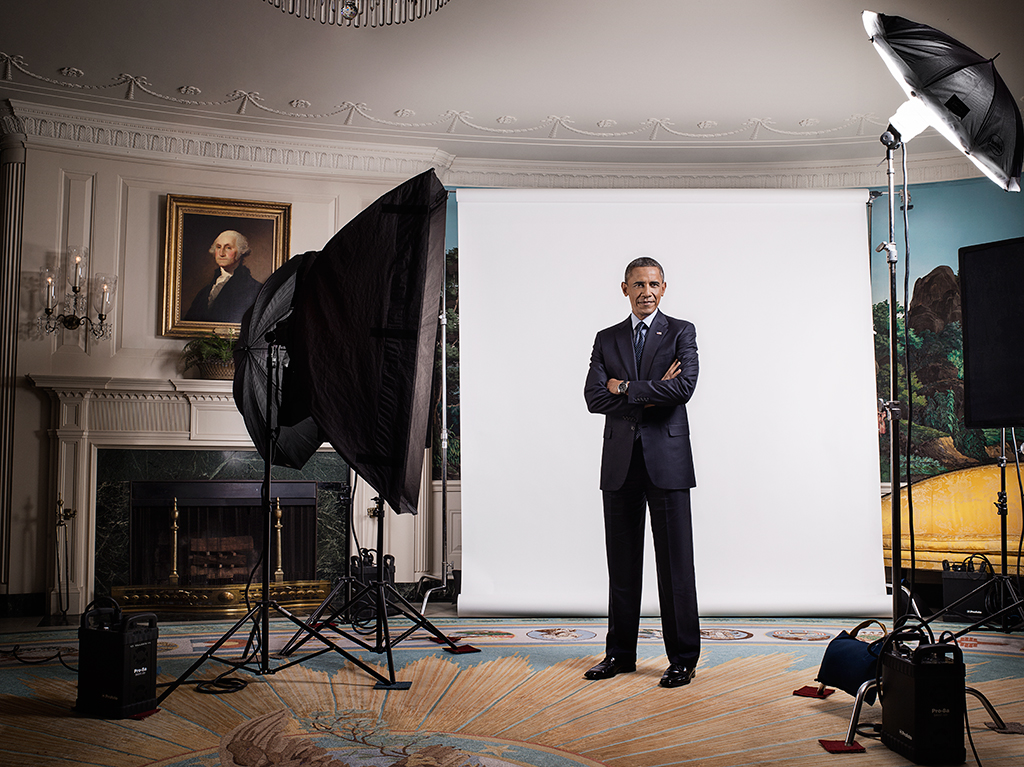 “You’re expecting to hear a grand announcement of ‘Ladies and gentlemen! The President of the United States!’ but it doesn’t happen. And Obama just walks into the room.

“All of a sudden I’m just three feet away from the President. He’s about 6ft 2 and he has a huge, huge presence – this amazing charisma.  When he looks at you and talks to you, you just feel like you’re the most important person in the world, even though he’s the busiest person in the world.

“I step forward, shake his hand and say, ‘Mr President, I’m Mark Mann from Esquire Magazine and he goes, ‘Great – how you doing?’.  David and Mark Warren introduced themselves, and I said ‘Mr President, this is my asssistant Esteban’.

“Obama holds out his hand and says ‘How you doing?’ and Esteban – who is an unshakable rock; you cannot fluster him – just cannot vocalise. He’s standing there with his mouth open and chokes. The President let it go on for a couple of seconds then clapped him on the shoulder and said ‘That’s great. What are we doing here?’ which I thought was pretty nice of him.” 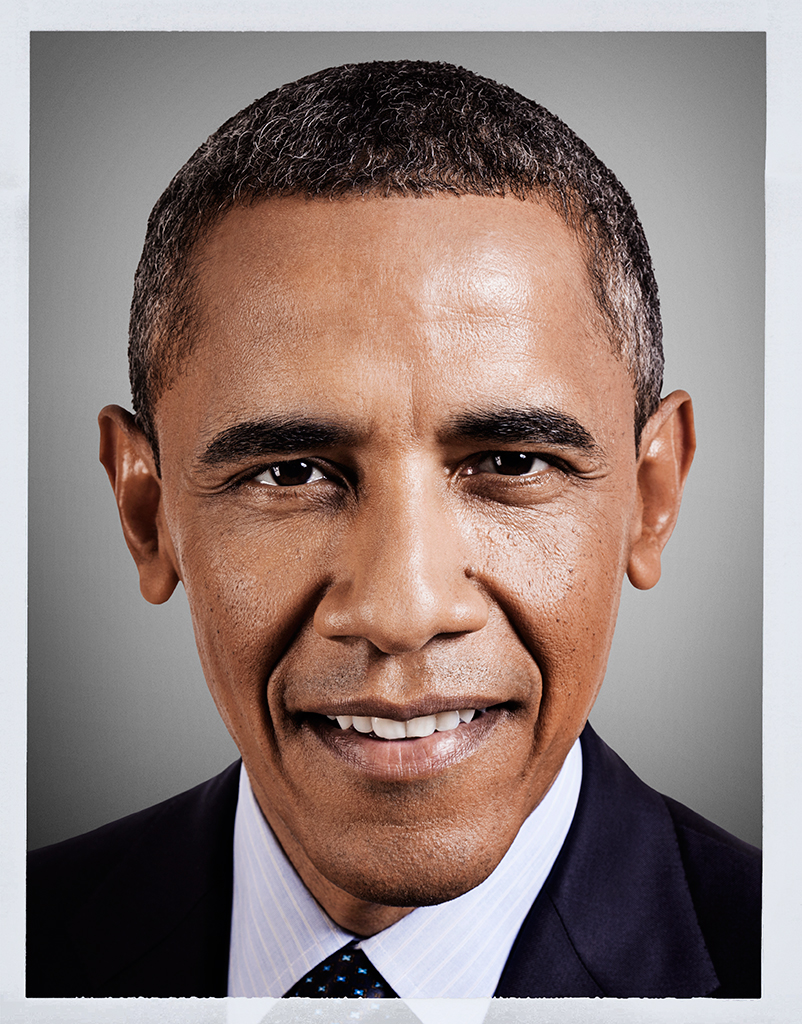 Mark’s shoots are notable for the way he gets to know his subjects by finding some common ground and, usually, making them laugh before he even starts taking pictures. But with such a limited timescale, how could he even begin to get to find out about Obama the man?

He says: “I started directing him and taking photos with all these White House people looking on. And I thought, this is weird, I haven’t even asked him how he is.

“So I put my camera down and say ‘How are you doing today, sir?’ and he says, ‘Fine, thanks. How are you?’. I say ‘I’m fine thanks, are you having a busy day?’ and that gets a huge laugh from the whole room.

“He smiles, and you suddenly realise this is a human being. I know I’ve only got a minute, but I just want to have a little ‘I’m thinking about you’ moment.”

Mark had only taken 30 frames when he was told to wind up the shoot after just four minutes.  But it was the President who had the last word.

“I take a couple more shots, then Obama asks ‘Can I get my picture taken with you guys?’

“Then, as quickly as he arrived, he leaves the room and all the hangers on sweep out after him. I’m just left kneeling on the floor, packing up.” 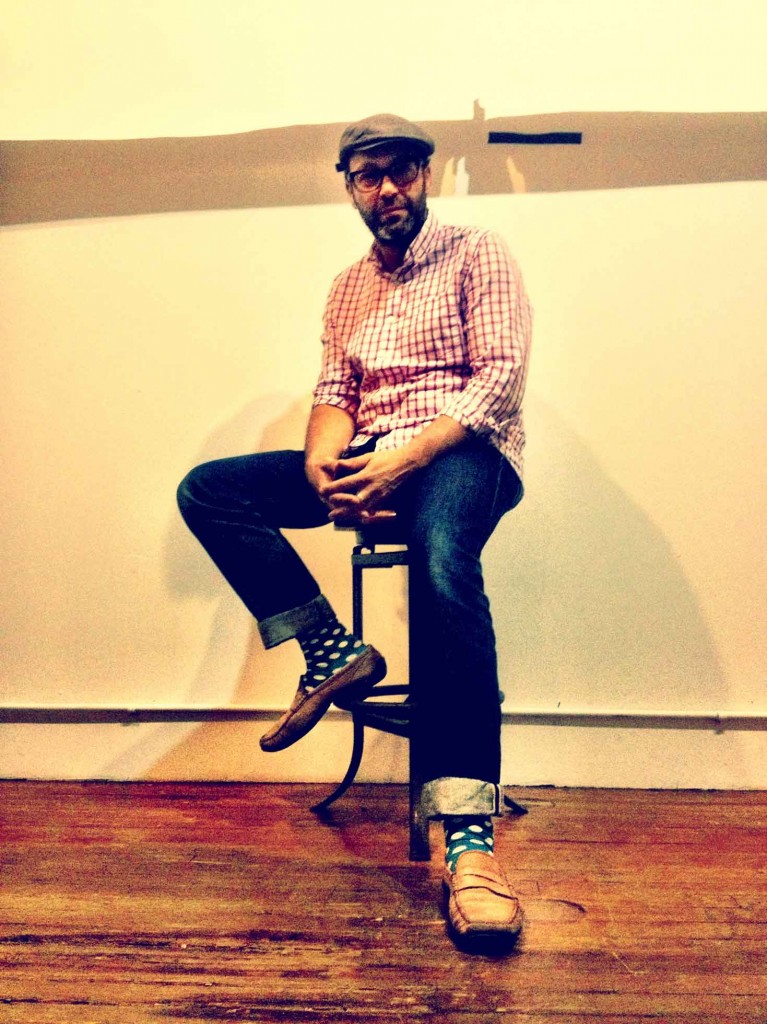 Despite the inevitable anti-climax, Mark is delighted with how the presidental shots turned out and is philosphical about his day at the White House.

He says: “I’ve shot a lot of amazing people in my career but there are a couple I haven’t done and really want to photograph – one is David Bowie – but the President was never on that list.

“I would have guessed that getting to photograph Bowie would be much easier to accomplish than Obama. Sometimes its weird that when you push and push for one goal, you end up achieving one that’s much much higher without even trying.”

You can see all Mark Mann’s photographs for the Esquire project at esquire.com, or at MarkMannPhoto.com

For further exclusive extracts of this interview, please stay tuned to our social media pages by following us via the links on the home page.