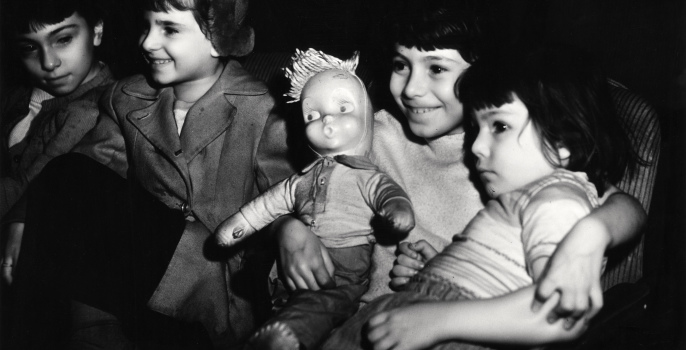 A shot in the dark for Weegee

on January 13 | in Culture, Vintage | by Boo Paterson | with No Comments

Legendary New York photographer Weegee liked to be ‘invisible’ when taking his noir-infused images – and a new exhibition shows just how close he got to his subjects without them even noticing.

Stills from Weegee: At the Movies show film-goers in the 40s oblivious to his lens in the gloom of the cinema; kissing couples, popcorn eaters, laughing children and men sleeping.

He managed to get within just a couple of feet from other audience members thanks to the development of infrared photography during WWII. 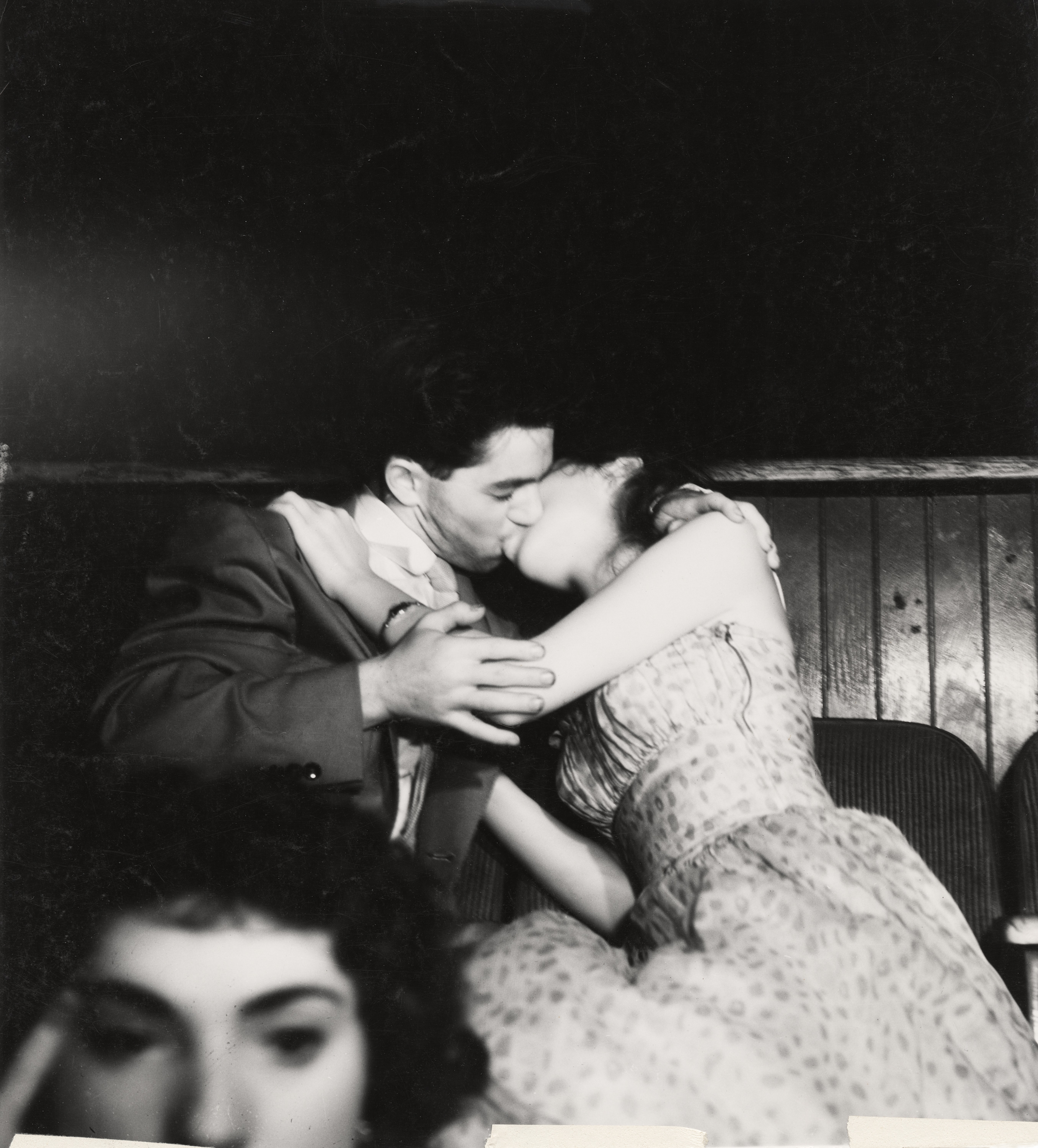 Weegee said: “I guess all photographers want to be invisible. We want to photograph people as they are, and people are never quite themselves when they know there’s a camera around.

“About the closest a photographer can come to be invisible is to photograph in the dark, using infrared film and infrared light. This way your subjects can’t see you and they don’t know they’re being photographed because the infrared flash gives off only a very faint flow.”

He found some problems with the technique though; the film wasn’t fast, the flash didn’t carry very far, it was hard to focus…and it didn’t pick up dark colors very well. 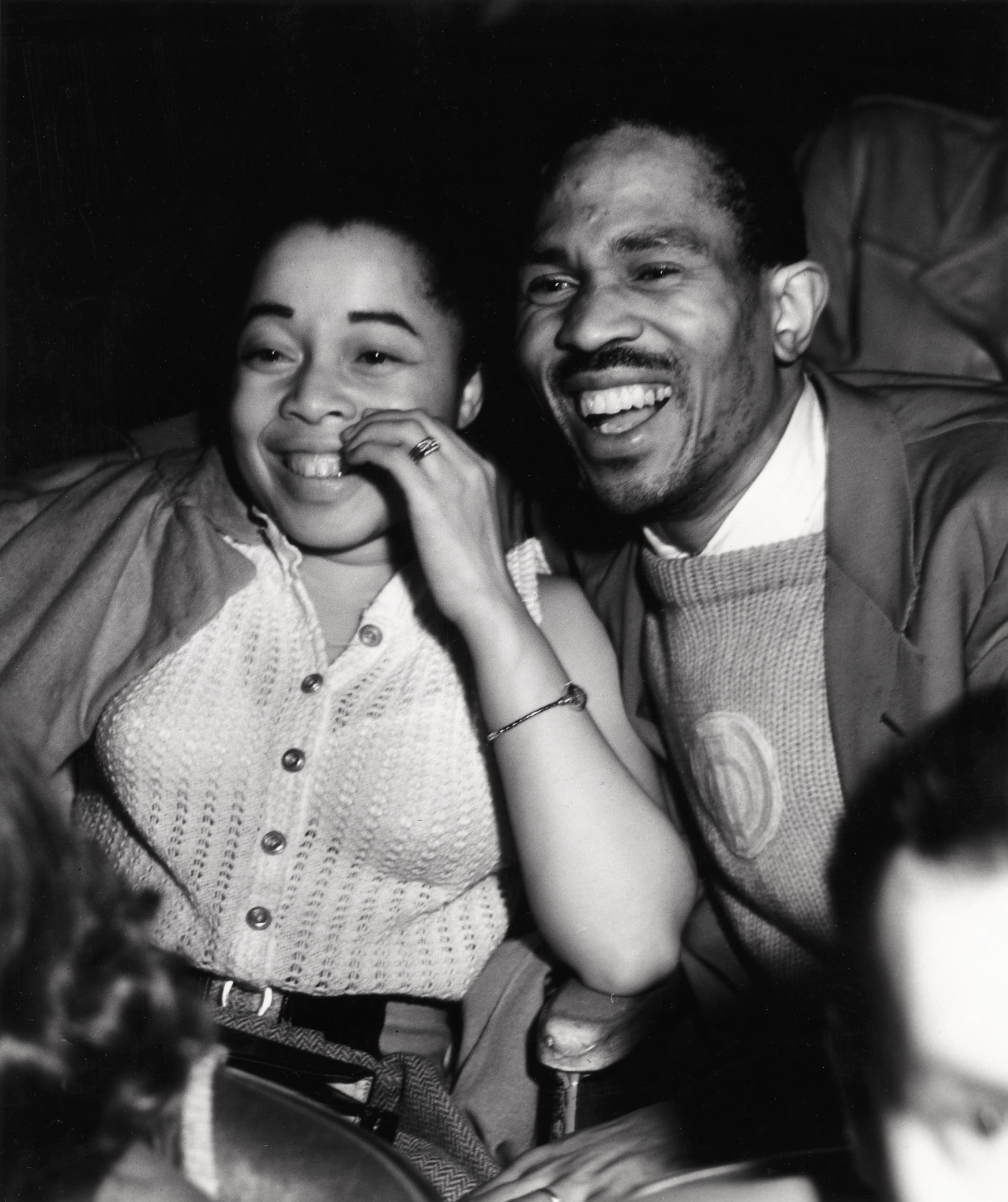 He said: “Blacks, browns, navy blues – you’ll lose them in infrared pictures. If you have a choice, pick a blonde instead of a brunette. (If you are a gentleman, this is supposed to be a natural preference anyway.)”

The exhibition at Bow Tie’s movie theater in Chelsea is the result of a collaboration between the International Center of Photography – which holds the Weegee archive – and the historic cinema chain, Bow Tie, to mark the theater’s reopening and the launch of ICP’s publication, Weegee Guide to New York.

ICP curator Pauline Vermare said: “These photographs were made between 1943 and 1945, right at the time Weegee came to fame – his iconic Naked City was published in 1945 and soon became a cult classic. Some of these images were published in Weegee’s People in 1946. 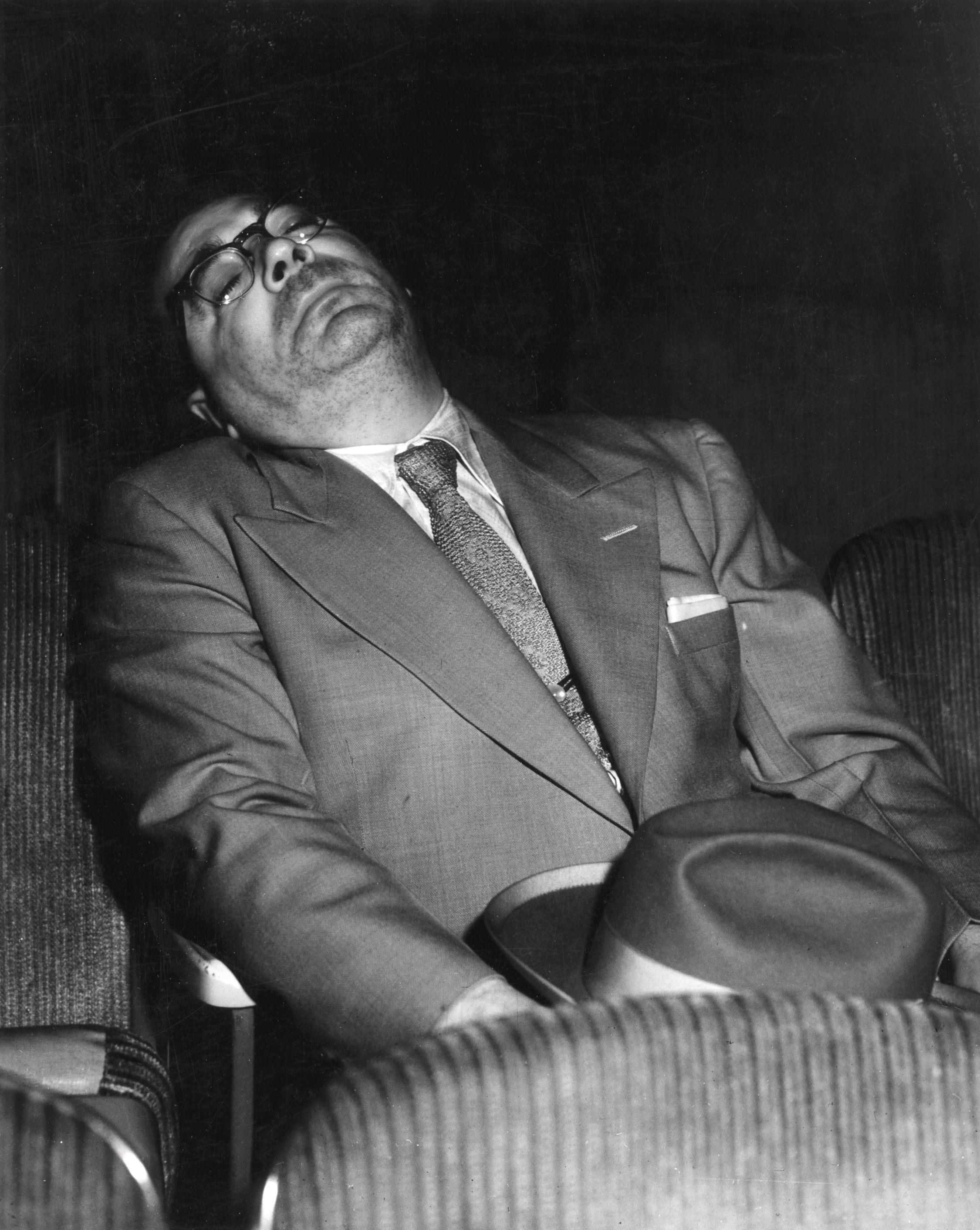 “They are classic examples of Weegee’s overall work, of his unique style – that slightly ominous tone; a window to a dark, parallel universe; images of the hidden lives of New York City. In all of his photos, from children in movie theaters to distorted celebs, Weegee attempts to show people and things that most people don’t see – or have access to.

“If one looks closely at his entire body of work, it becomes obvious that these cinema photos are similar to many other subjects or series like The Opera, The Beach, or Sammy’s: they are all about simple, popular, ordinary pleasures, but with a very specific edge, a form of mystery, that is very characteristic of his entire oeuvre.”

Weegee, whose real name was Arthur Fellig, first became famous for his gritty photographs of murder scenes, fatal accidents, and New York’s grim underbelly in the 30s. His cinema photos were taken during WWII, a time, he said, when “crime was decreasing…crime was changing, ‘Murder Incorporated’ was changing…” 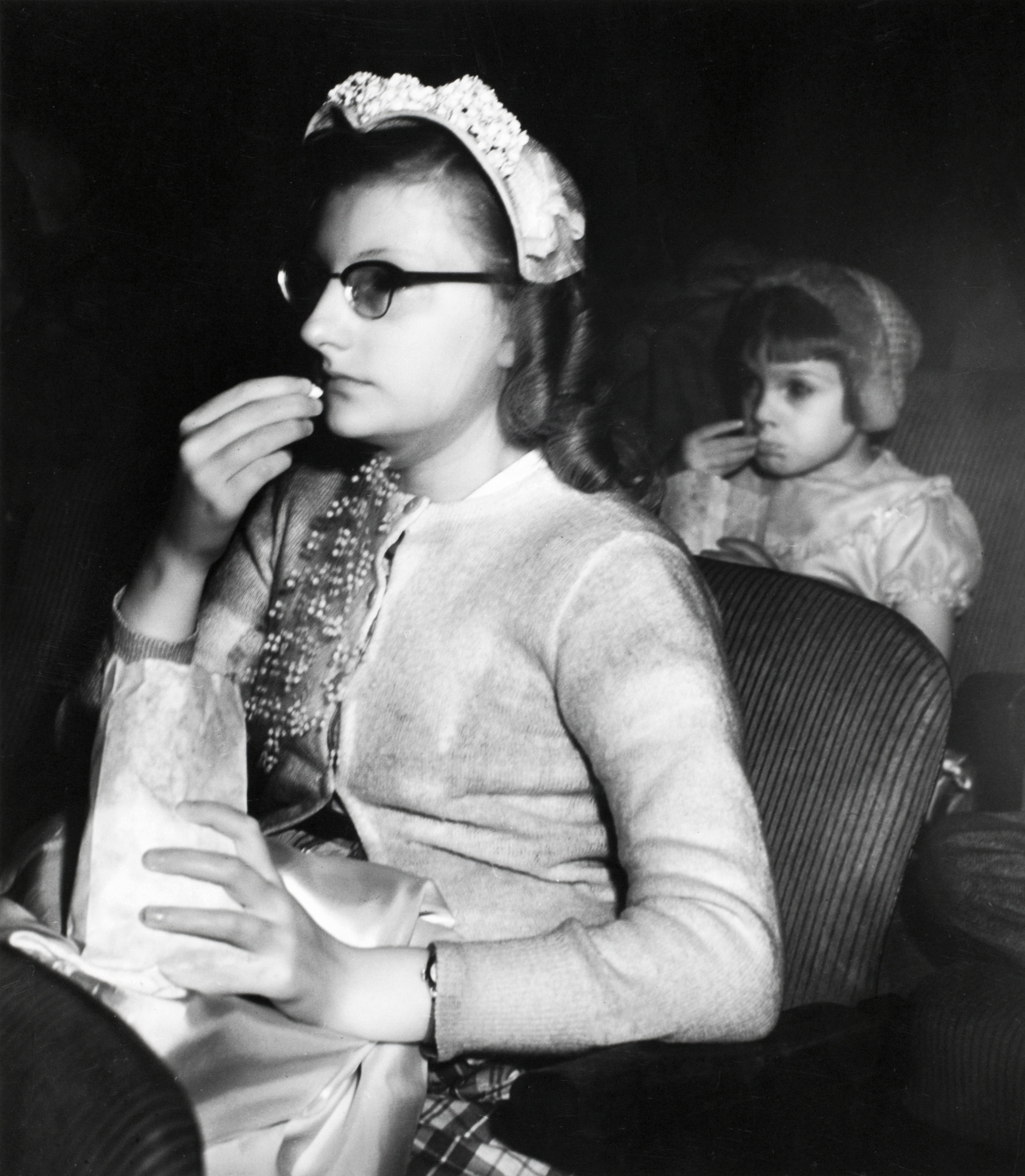 Like some of his subjects, he would often go to movie theaters to sleep, or even have lunch – usually a hot pastrami sandwich and a Coke – perhaps sizing up future shots.

He said: “Here under the cover of darkness people find escape, privacy, and seclusion. Under the hypnotic spell of the screen, they are without their masks. They are themselves.”

However, he didn’t always get the frame he wanted, saying: “Sometimes discretion is the better part of valor. When I see a guy who looks like a prize fighter with a babe who looks like – well, you’ve got to know when not to take a picture.” 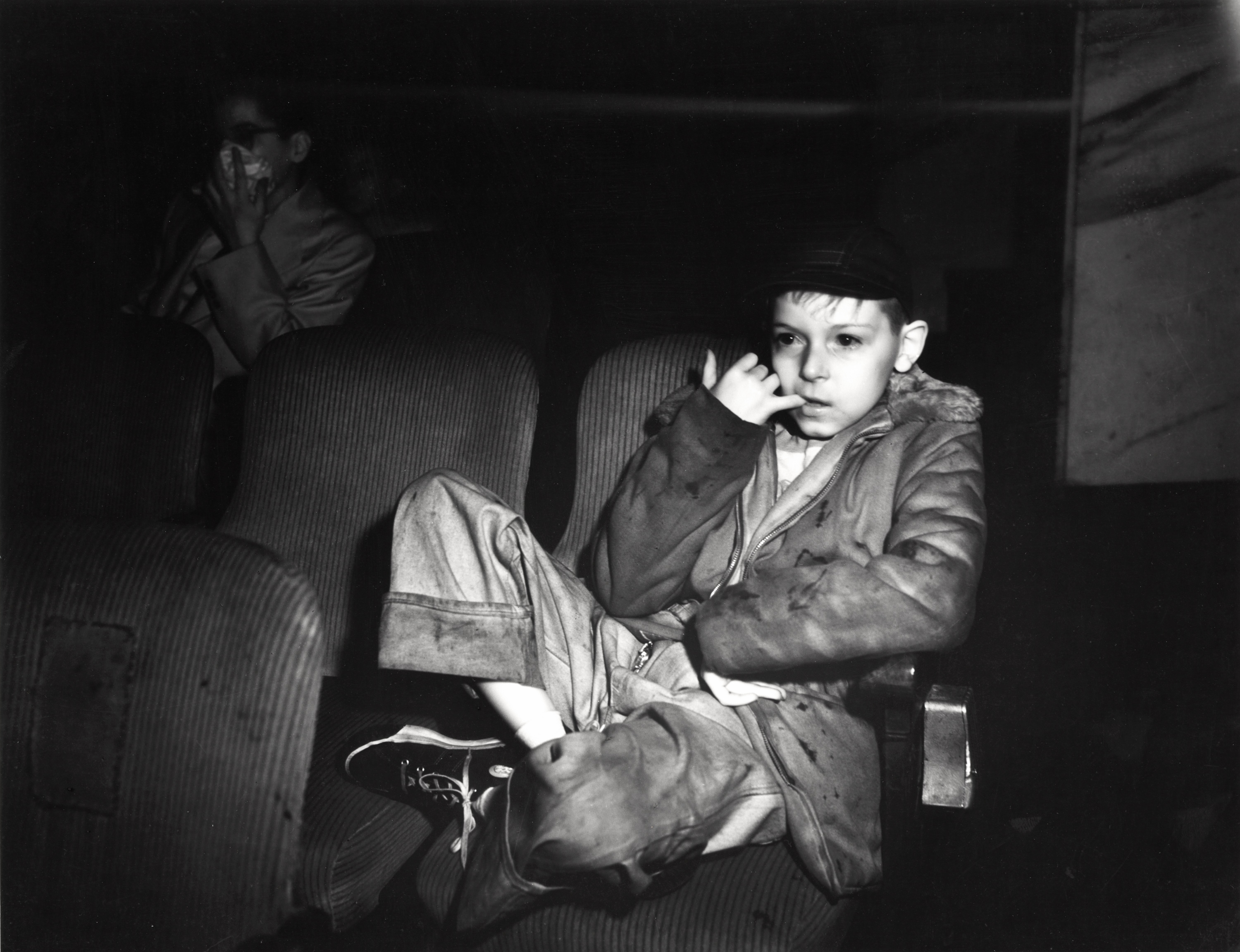 Jared Milgram, Vice President of Marketing for Bow Tie Cinemas, said: “We are thrilled to partner with the International Center of Photography and enhance the overall customer experience at our newly renovated Bow Tie Chelsea Cinemas.

“Patrons are consistently occupying the gallery space, giving positive feedback to our staff and asking questions. With this partnership, we hope that a prominent part of the neighborhood becomes an exclusive destination of the Chelsea art community.” 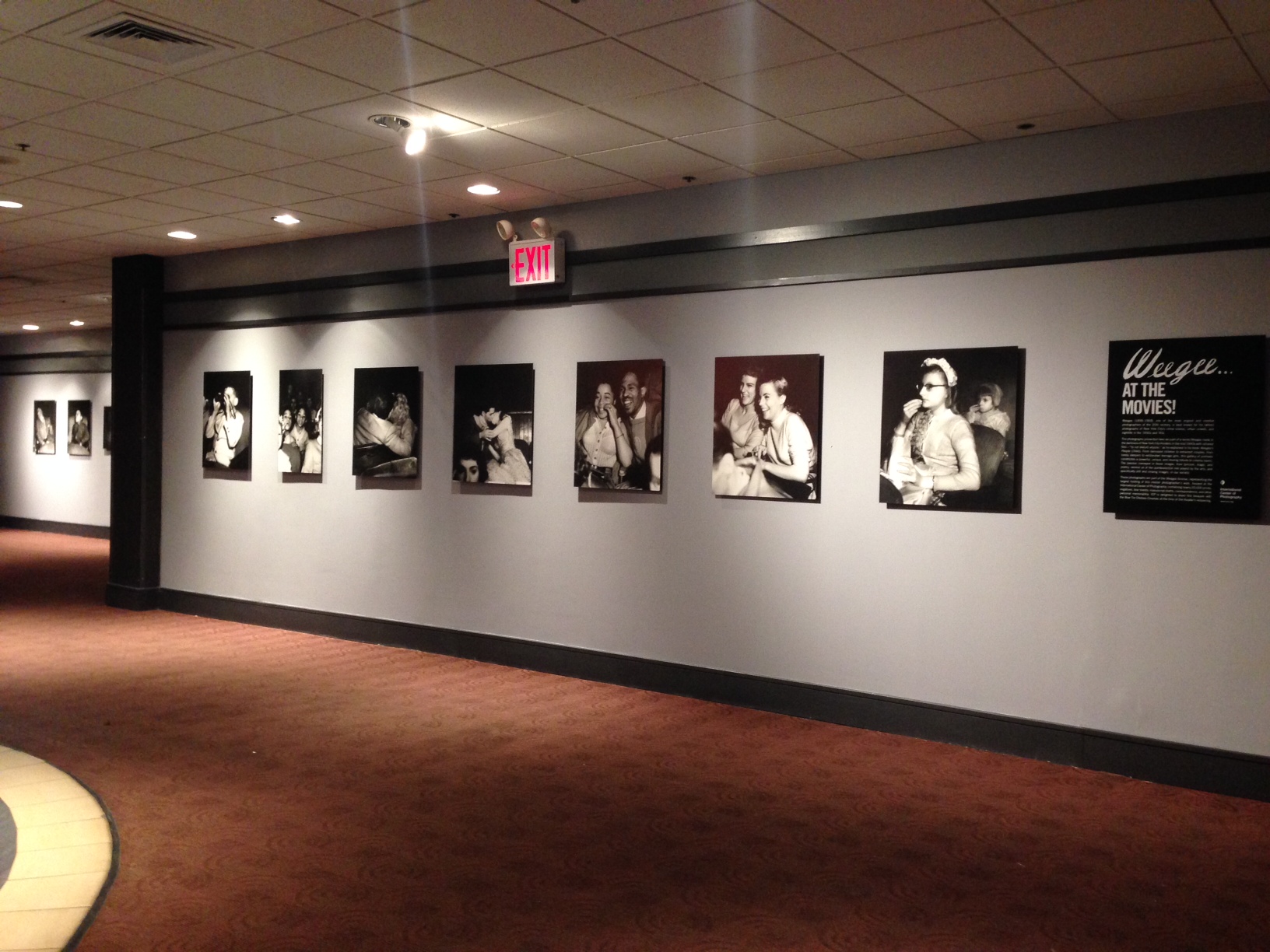 Pin It
» Culture, Vintage » A shot in the dark for Weegee black and white, new york, photography, retro, vintage, Weegee