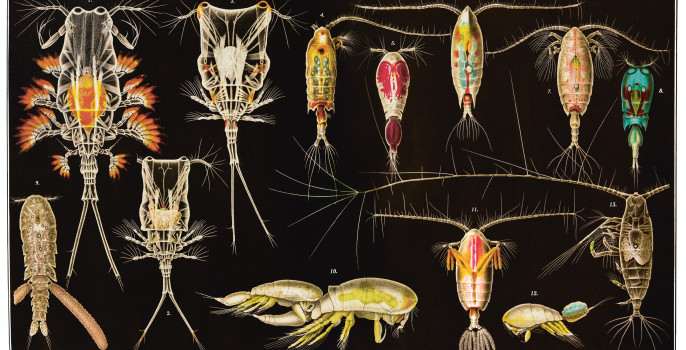 on October 19 | in Culture, Vintage | by TopDog | with No Comments

The beauty and diversity of ocean life is showcased at a new exhibition of vintage illustrations – some dating back more than 400 years.

Opulent Oceans – which even includes artworks from the books of naturalist Charles Darwin – features everything from colorful mollusks to deep-sea fishes and explores the role illustration has played in undersea exploration.

The American Museum of Natural History’s show explains how European voyages of discovery began mapping the globe around 400 years ago, and knowledge of ocean life flourished as never before.

By sketching specimens or collaborating with artists and engravers, explorers documented their discoveries in illustrated books featuring images that highlight the anatomy, life cycles, habits, and beauty of newfound marine species.

The show features large reproductions from 33 rare scientific works, including a woodcut of a dolphin from 1555 by noted French explorer, physician and naturalist Pierre Belon, and an image of acorn barnacles from one of Darwin’s important volumes.

Curator Melanie Stiassny – who has written a book to accompany the show – said: “The beauty of the illustrations is phenomenal. This exhibition takes a look back at the lives and contributions of some of those who helped lay the foundations of ocean science and bravely led the way on this continuing journey of discovery.

“We really are still in the midst of the great age of ocean discovery and, as an active researcher in the field, I have found it truly inspirational to delve into the past of that discipline.

“I have tremendous respect for the extraordinary courage and commitment of these early marine explorers. When I am in the Congo, we have satellite phones. We go to a cybercafe once a month. They were out there for years with no communications, suffering diseases, shipwrecks – and think what they did. They traveled, wrote, did so much, and then died at 30 or 40.”

*Opulent Oceans is on until October 2, 2016. The rare books, whose images are featured in the show, will also be displayed on a rotating basis. The museum is open daily, 10am–5.45pm.

VAMPIRE SQUID…the only known octopod that is not an active predator. © AMNH\R. Mickens

About the Author: TopDog