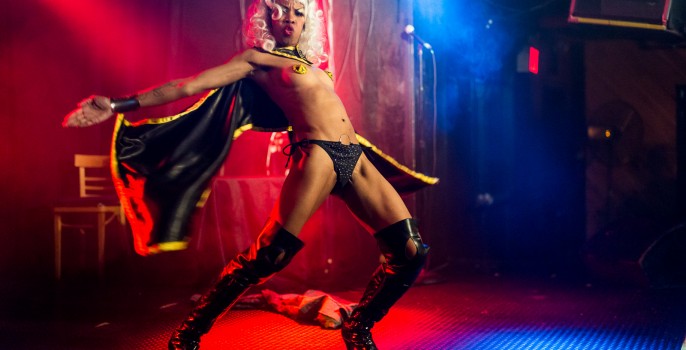 on October 6 | in Culture | by Boo Paterson | with No Comments

You like superheroes, right? They’re fit, attractive types who save the world. Now what about superheroes – and X-Men in particular – naked?

This Friday, Wolverine, Storm, Cyclops and Kitty Pryde will be seen in more than their usual glory when some of New York’s favourite neo-burlesque stars strip live on stage for X-travaganza.

The show launched in July with an eye-popping debut, which saw Fem Appeal – clutching thunderbolts in a winged satin cape – perform as Storm to the Scorpions’ Rock You Like A Hurricane, before Miss Charles Stunning, as the Scarlet Witch, stripped to My Heart Belongs to Daddy. 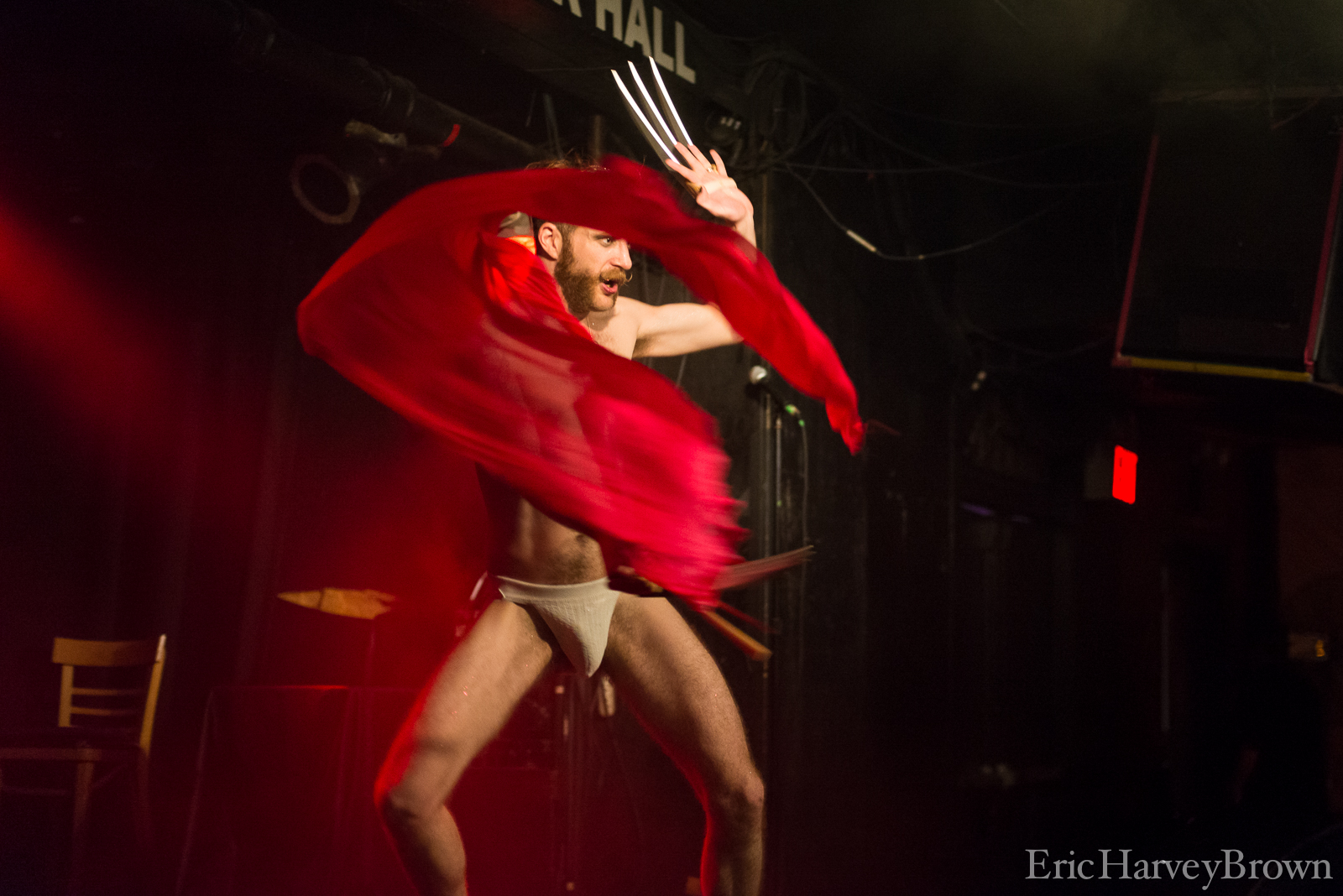 SHARP…Matt Knife as Wolverine from the X-Men. Pic by Eric Harvey Brown

Matt Knife stroked nine-inch metal claws all over his body as Wolverine and Topher Bousquet took Nightcrawler into another league with his astonishing contortion skills.

Lefty Lucy – who appears as Kitty Pryde – conceived and co-produced the show and, in true neo-burlesque style, wanted to push boundaries – leaving the traditional glamor of fan-dancing in rhinestone gowns far behind.

“We play with gender-swapping, gender-bending, atypical type casting – everything in my burlesque shows is meant to celebrate and showcase passion and diversity while entertaining,” she says.

“The X-travaganza features a range of acts representing characters as diversely as the various X-Men cartoons, comics, and movies have. Some acts are silly romps exploring a character while others are dark and moving.

“There’s always audience participation in my shows; the audience and performers depend on each other and there’s a constant give and take between us.

“The joy of burlesque is that it is a variety of things. Classic burlesque, with its stunning gals in gowns and gloves is the image most commonly associated with the art form, but there’s also neo, nerd and boy-lesque too, and all of these will be represented in some way in our show.

“They all stem from the same tradition, and the best burlesque is focused on entertaining an audience and playing with or taking advantage of the expectations of what burlesque is.” 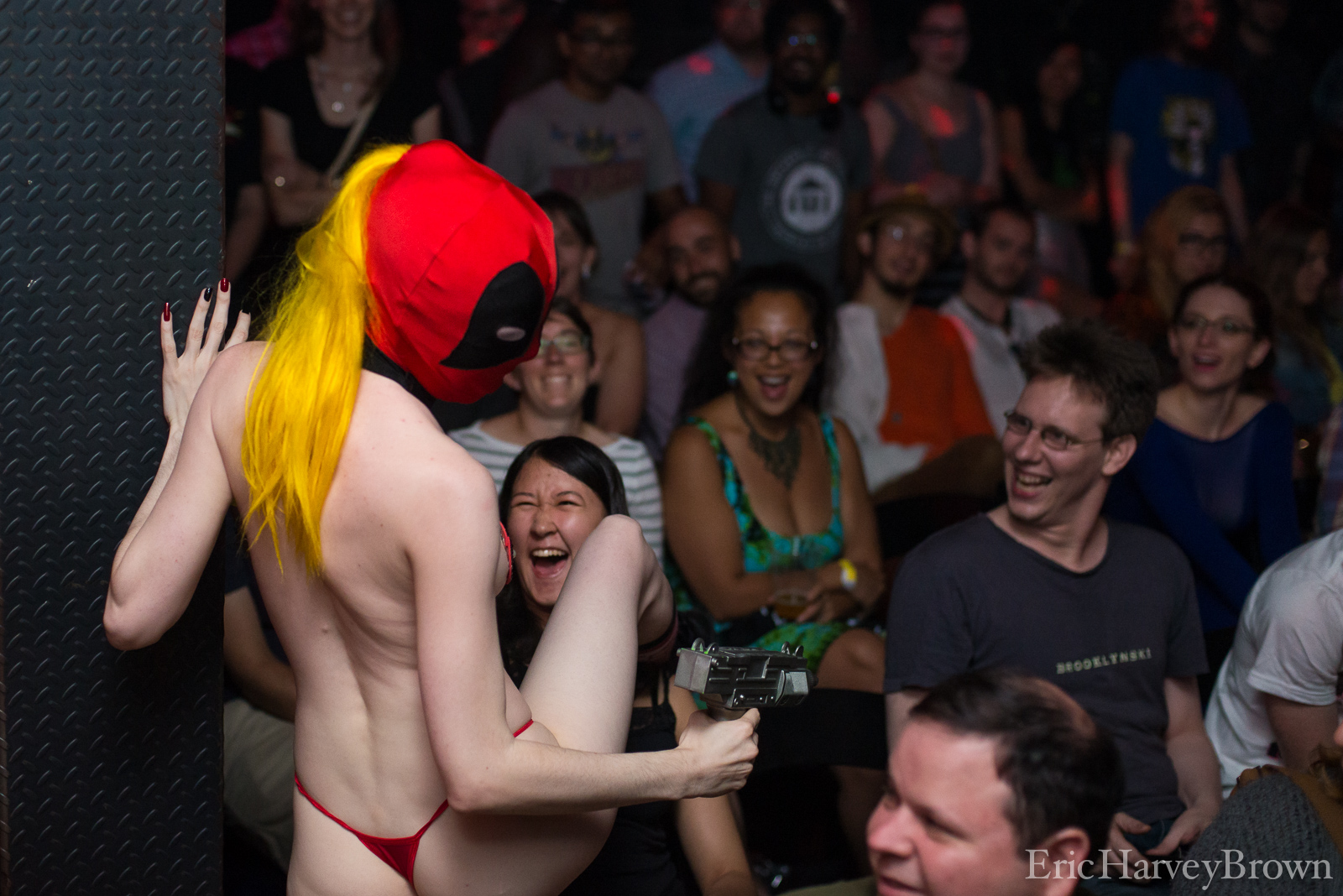 GUNNING FOR ‘EM…Mary Cyn as Deadpool at the first X-travaganza in July. Pic by Eric Harvey Brown

The upcoming show, which coincides with New York Comic Con, features Agent Wednesday as Mystique, Hazel Honeysuckle as Jubilee, and Suffra Gent as Cyclops, among many others.

Lefty – who is Vice President of Miss Coney Island and Executive Producer of the Nerdlesque Festival – came up with her Kitty Pryde act about five years ago, and since then has been ‘trying to crack in to the vast universe that is X-Men’.

And though her work naturally involves a lot of nudity, she is adamant that everything she does is from a feminist standpoint. 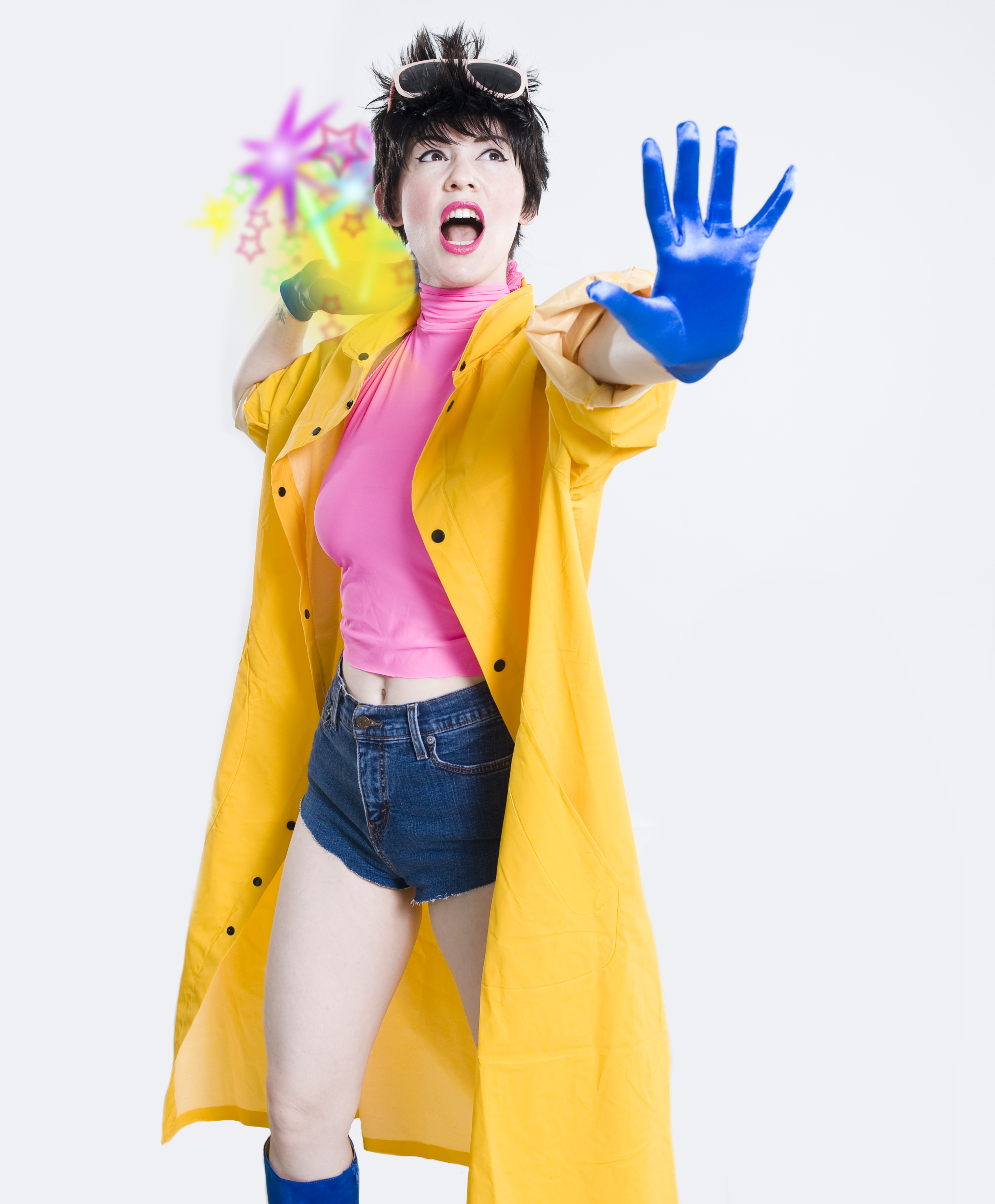 YELLOW PERIL…Hazel Honeysuckle as Jubilee from the X-Men.  Pic by Ben Trivett Photography

She explains: “I believe that being feminist is like breathing. The idea of feminism in the context of burlesque, for me, has a lot to do with the notion that women are people.

“If a person loves something and finds a way to express that love that brings them and others joy, then they should be able to do that without shame or second thought on account of their gender or body type or skin color.

“I produce my shows as a place to encourage that kind of celebration. Are my shows for everyone? No. Haters gonna hate. But I believe that the act of being yourself fully and passionately, without fear or shame, is a feminist idea. With that being the case, then all of my shows have a feminist slant.”

*X-travaganza is on at Slake, Friday, October 10.  Doors are 7pm for 8pm show and tickets – which start at $20 – are available here. There is also a raffle, with prizes from Circlet Press, Halloween Adventure, Original Sin Cider, and Toy Tokyo.