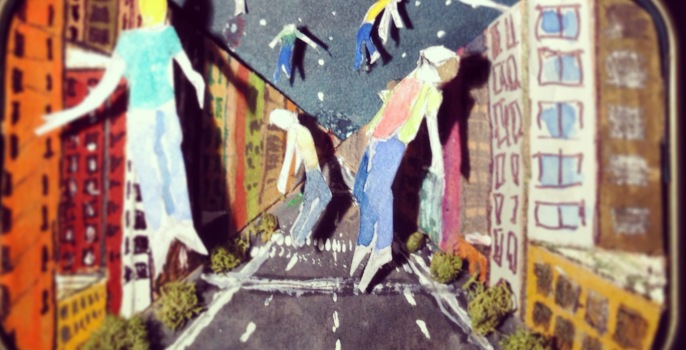 on April 15 | in Culture | by Boo Paterson | with No Comments

Advertisers have been trying to sell dreams for over a century, but one New York artist is actually bringing them to life – inside Altoids tins.

Christopher Grant originally began making the beautiful, intricate artworks for his girlfriend, Grace, so she could carry her dreams around in her pocket.

He said: “It all started one morning when Grace recounted this crazy dream that she had just had where it was simultaneously day and night and there was an old ship at sea with three whales splashing their tails in the distance.

“Dreams are so real and visceral during the process and immediately vaporize upon waking, so I wondered how I could preserve at least a moment of something so ephemeral and lasso its whimsy.” 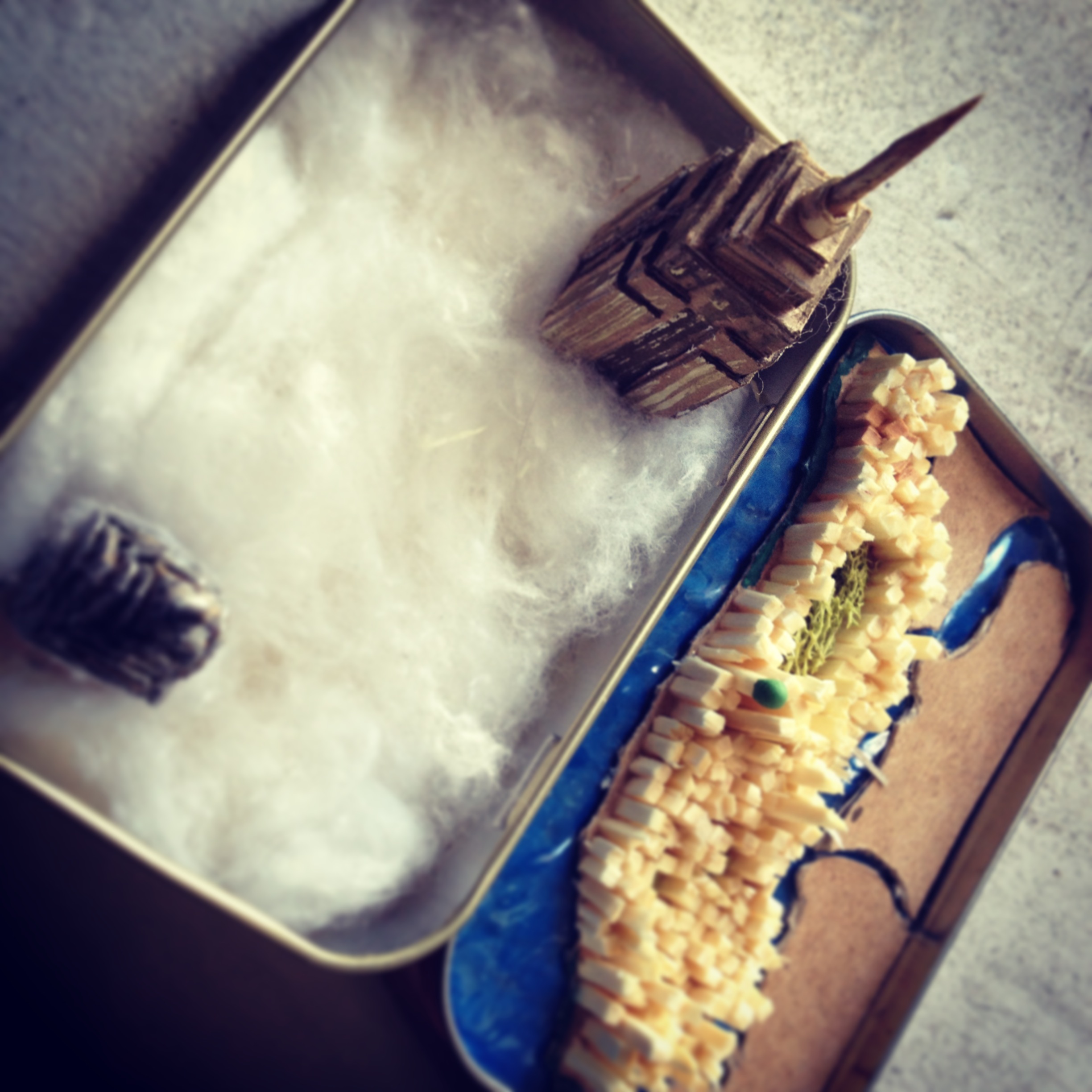 “I distilled that into the simplest ima­ge in my mind and started drawing and cutting up paper. I’ve loved dioramas since I was a wee lad, plus I love Altoids and had all these old tins teetering in haphazard stacks around my room waiting to be utilized, so I thought ‘why don’t I make little dioramas in these tins and give them to Grace so that she can have a menagerie of her dreams?’”

Christopher – who is originally from Texas, but currently lives in Queens – now creates the dream boxes to commission, and has a few rules he sticks to in order to retain the elegance of the artworks.

He said: “I try not to ask too many questions of the dreamer – I just want them to describe what they remember of their dream while its relatively fresh, and I’ll take what pops out and put it into actuality. I’ve stopped trying to capture an entire dream and focus instead on an encapsulated moment. 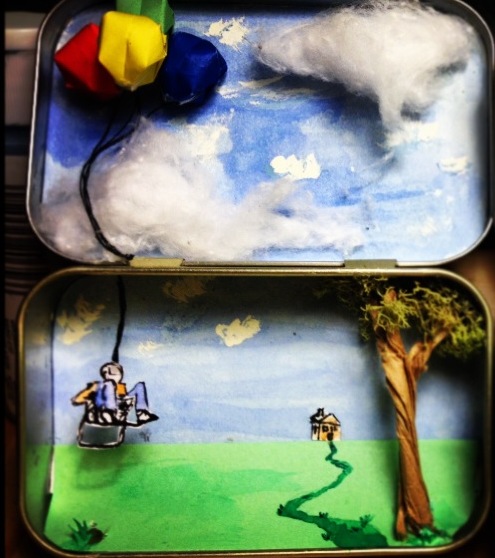 “I’ve got a limited amount of surface area to work with so I try not to make them too busy. Recently, I’ve also been experimenting with the range of depth, as the tins are only about an inch deep, and how micro or macro I can make something given the space restrictions.”

As well as being an artist, the 30-year-old is also an established actor, whose credits include the Broadway smash, Million Dollar Quartet, and the movie Rolling On The Floor Laughing, which was in the official selection for Sundance, Milan and Toronto film festivals, among others.

Christopher has been hugely creative since he was a child, when he ‘drew on everying’, much his mother’s annoyance. By seventh grade, a teacher noticed his talent and encouraged him to stay after school to teach him basic jewelry making. His insatiable desire for artistic expression then led him to take up ceramics and photography in college, and he has subsequently immersed himself in the art of watercolours, bookbinding, cartoons and finger puppets. 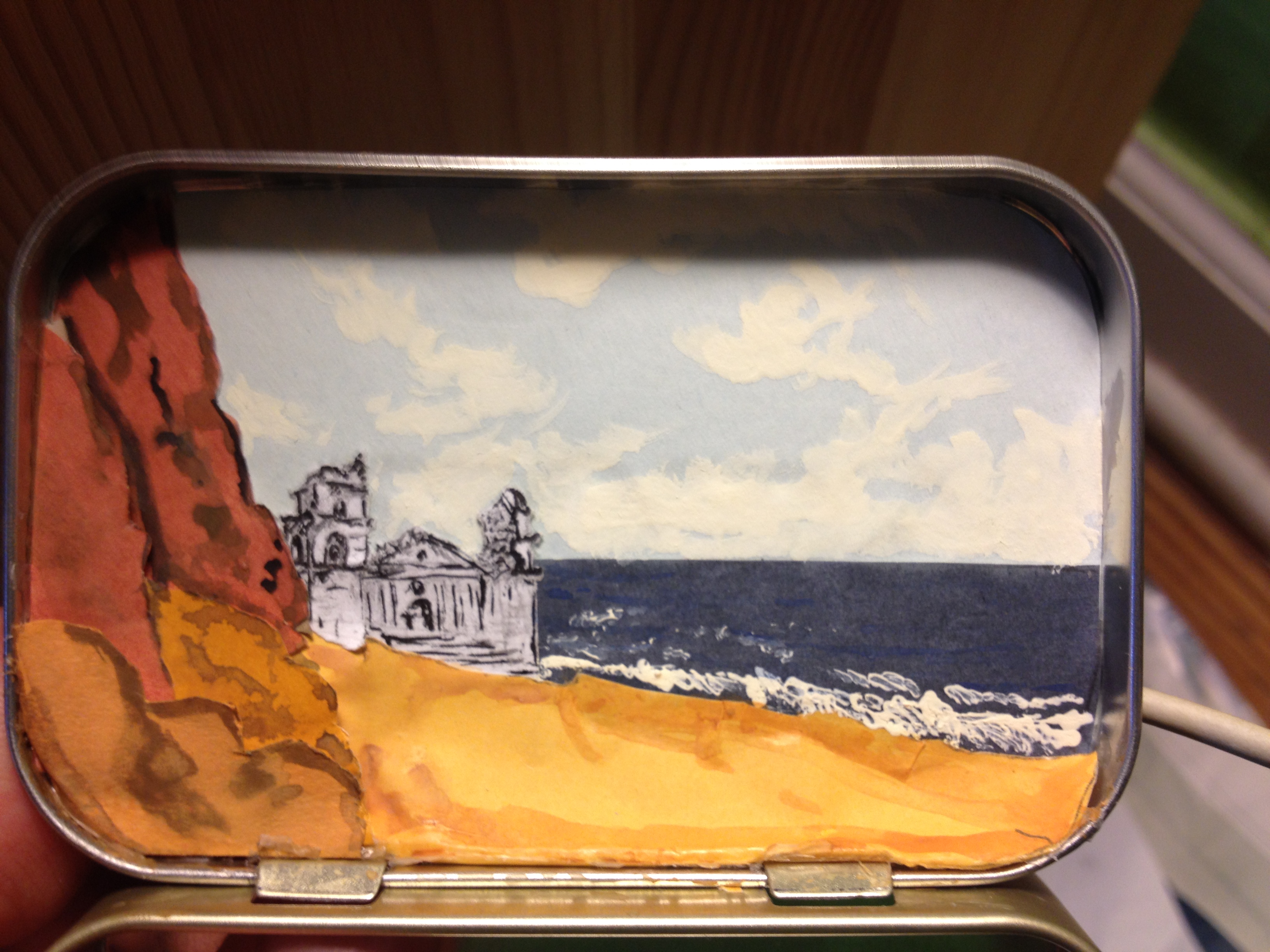 And he’s keen to add even more strings to his bow with, among other skills, screen-printing and carpentry.

Christopher – who is currently talking to galleries about showcasing his dream boxes – said: “As well as the dream boxes, I’m also really excited about creating lamps at the moment. I made a lamp for living room out of this great branch that I found in my neighborhood after a storm and some old rusty lanterns I had lying around. I want to make these moveable, found-object robot lamps. They’ll have goose-neck eyes and bodies that open up to reveal mother boards and all that machine-y robot nonsense.

“I just love trash day in NYC. Every time we go out for a walk, I stop at every trash heap to inspect sticks and discarded machine parts. As an artist, you’re constantly scouring the world for your next idea.” 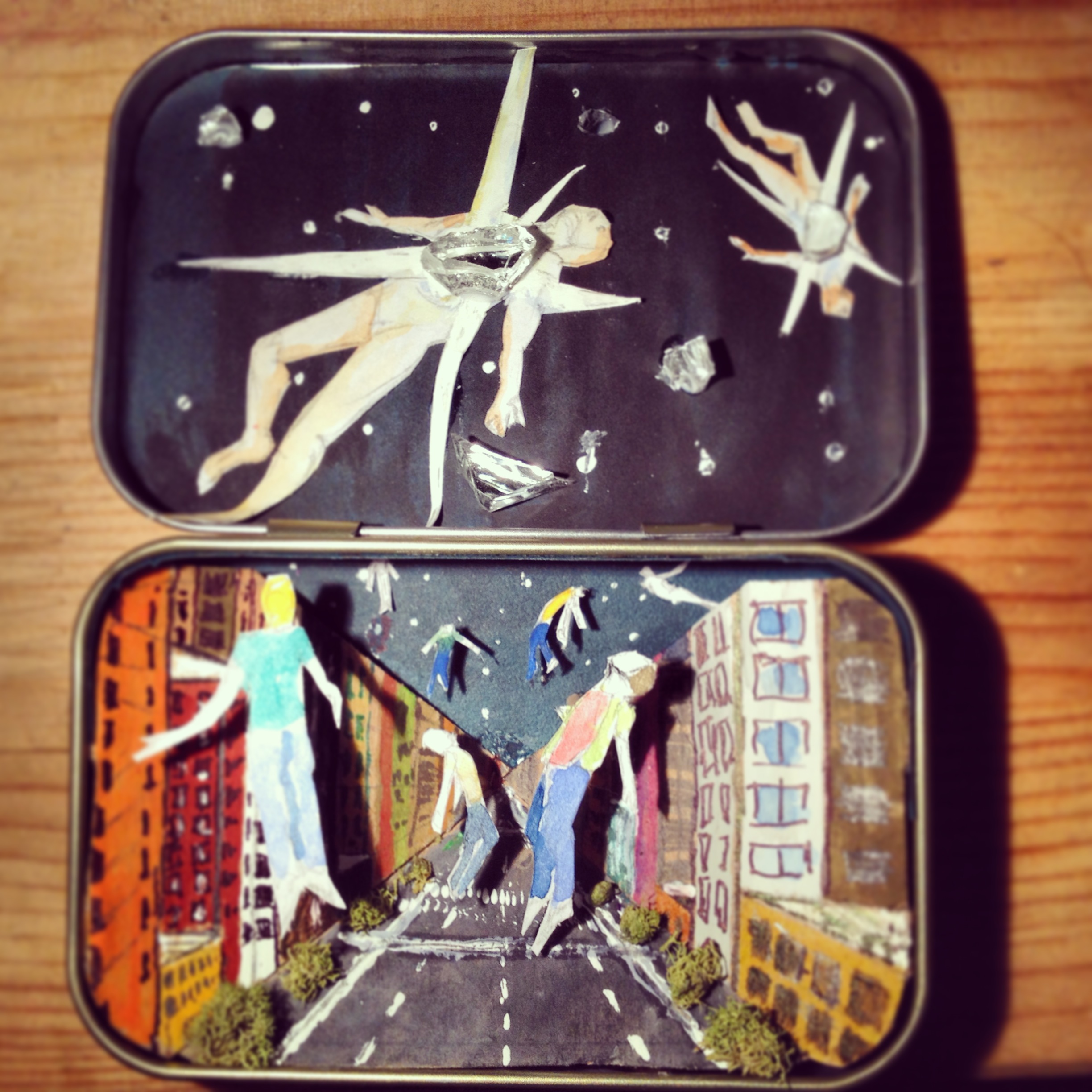 STUNNING…people float up to heaven and become stars

He added: “Grace’s dreams provide a font of really fun – and sometimes scary – images in which to work. With the dream boxes, I really enjoy the fact that, closed, they just look like Altoids breath mints. However, when you open them, you get to see the beautiful strange world of my girlfriend’s subconscious.”

A representative from the Altoids brand said: “We have always embraced the curious and we love hearing about unique ways people use Altoids tins.”

*To commission your own dream box from Christopher, email: christopherrgrant [at] gmail.com 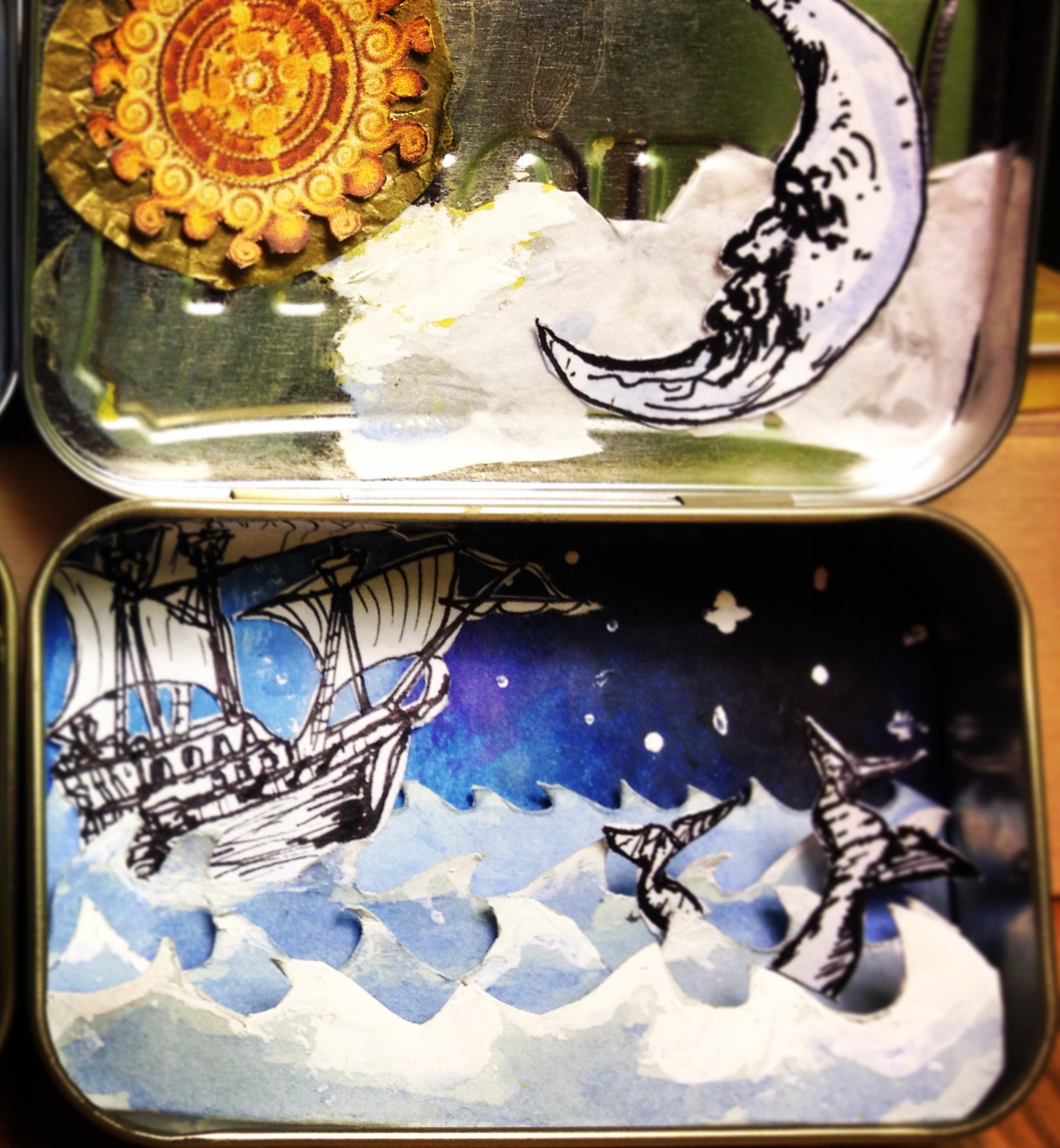 NIGHT AND DAY…one of Grace’s dreams, showing a sailing ship with the moon and sun in sky simultaneously