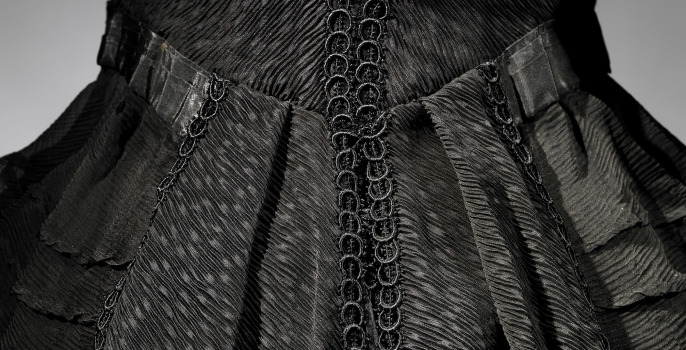 on November 3 | in Culture, Vintage | by Boo Paterson | with No Comments

A widow is a dangerous thing – or so the Victorians thought – and a new exhibition of historic mourning clothes shows just how publicly women were expected to mourn.

Death Becomes Her: A Century of Mourning Attire, at The Metropolitan Museum of Art, explores the reasons why women in particular had such strict social conditions placed on their grief, as well as exhibiting the actual garments they wore.

Harold Koda, Curator of The Costume Institute, said: “The veiled widow could elicit sympathy as well as predatory male advances. As a woman of sexual experience without marital constraints, she was often imagined as a potential threat to the social order. 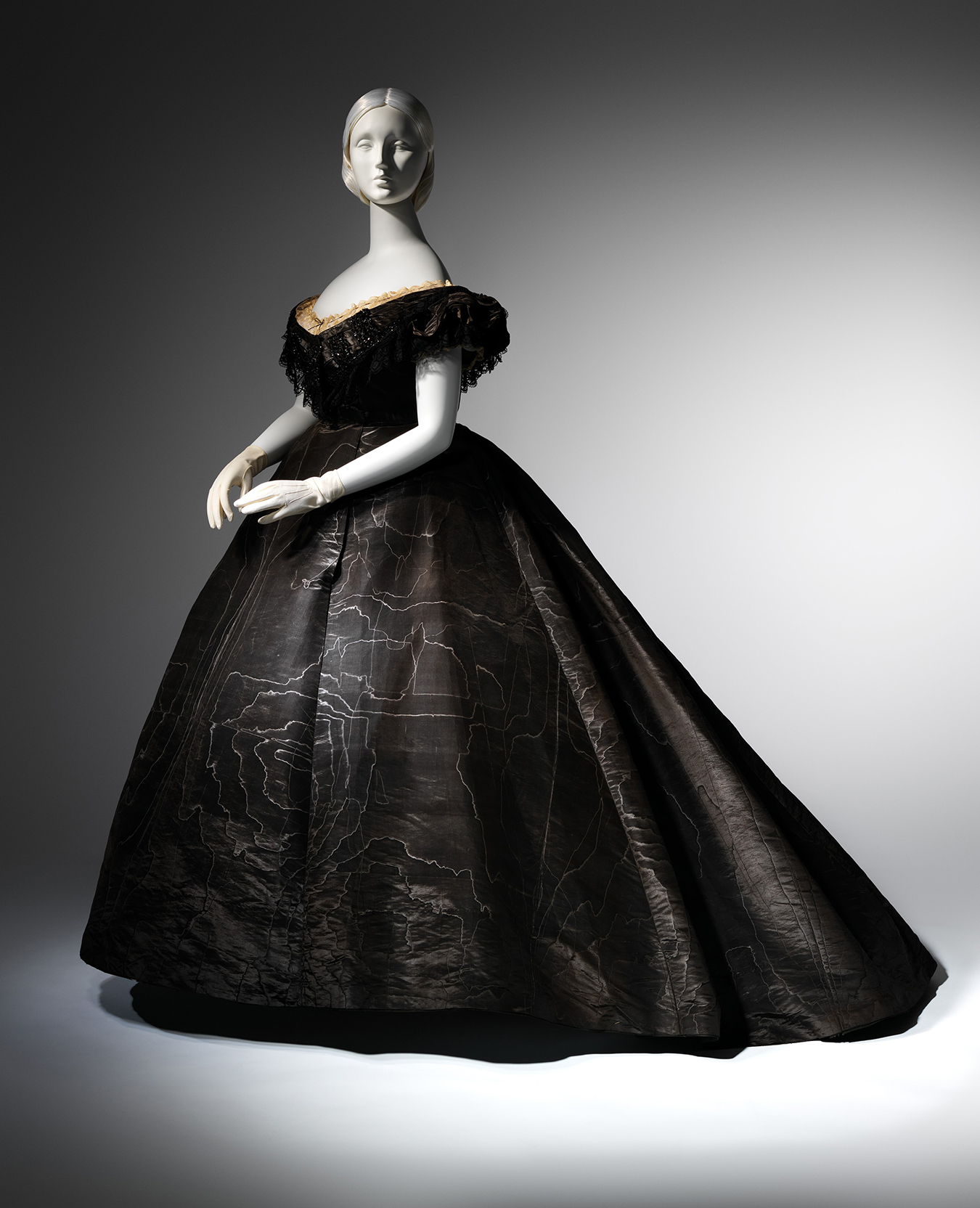 GRIEF.. An evening dress from around 1861 in black moiré silk, black jet and black lace

“The predominantly black palette of mourning dramatizes the evolution of period silhouettes and the increasing absorption of fashion ideals into this most codified of etiquettes.”

The custom of wearing black to mourn a death dates back to Roman times, when mourners thought they could stop the ghost of the deceased haunting them by hiding themselves under jet-colored garb.

But by the 19th century, the custom was for women to wear heavy black ‘widow’s weeds’ for up to four years after a death, though they could choose to wear it for the rest of their lives if they had been widowed. 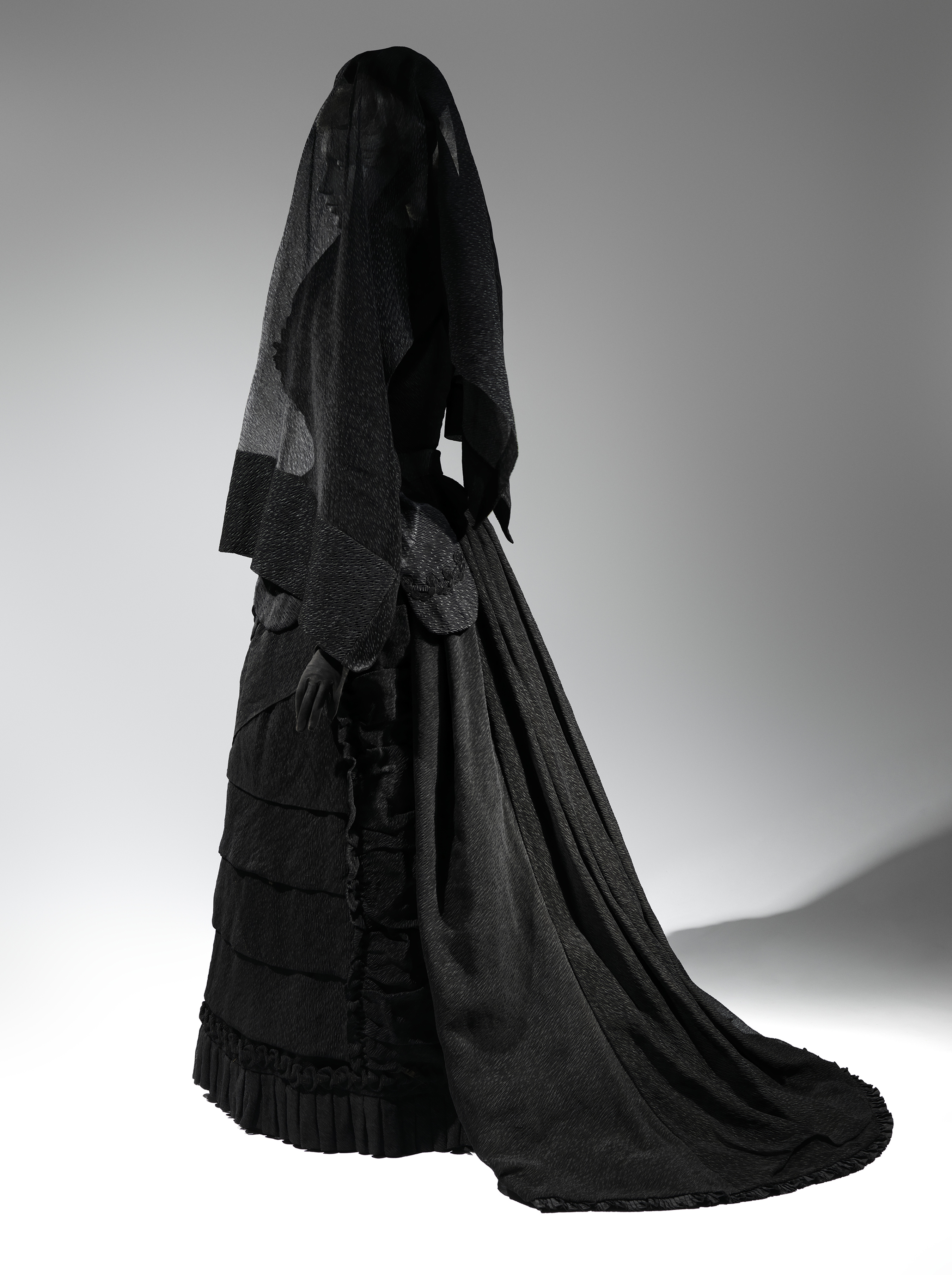 A scandal would be sparked if a women chose to discard black before the time limit was up, especially if she was still young, as this was seen as a sign that she was sexually active.

Normal garments were slowly reintroduced over specific time periods. ‘Half mourning’, where dark, muted colors like grey and lavender could be introduced, came into force more than two years after the loved one had died,

The exhibition – which covers the period from 1815 to 1915 – has examples of this in the clothing of Queen Alexandra, who wore glitzy purple empire-line ballgowns covered in sequins, as part of her late-mourning etiquette. 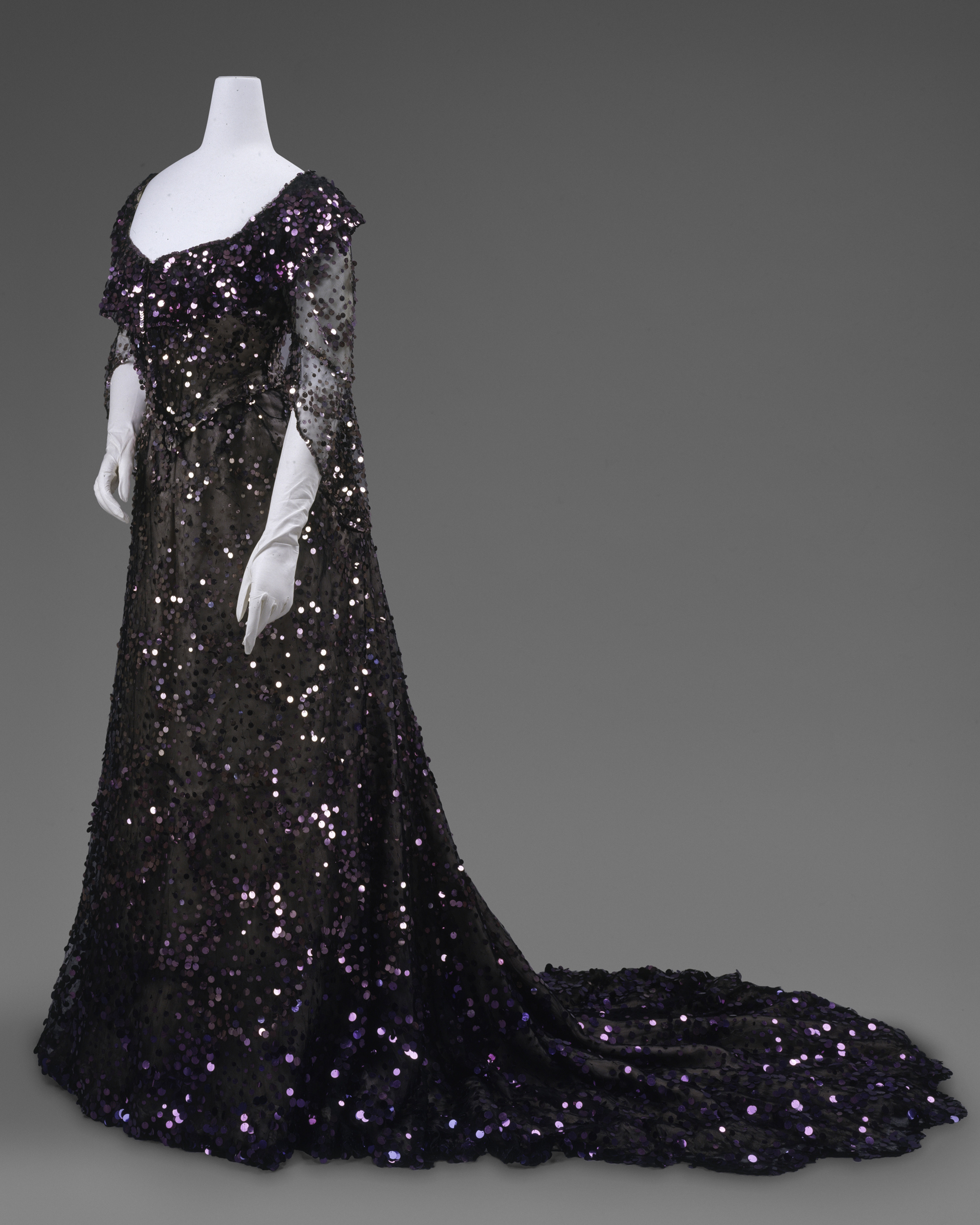 Assistant Curator, Jessica Regan, said: “Elaborate standards of mourning set by royalty spread across class lines via fashion magazines, and the prescribed clothing was readily available for purchase through mourning ‘warehouses’ that proliferated in European and American cities by mid-century.”

Approximately 30 ensembles, many of which are being exhibited for the first time, will reveal the impact of high-fashion standards on bereavement rituals as they evolved over a century.

Queen Victoria, whose long and conspicuous grief over the death of her husband, Prince Albert, may have had much to do with keeping the strict mourning rules in place. After her death in 1901, formal mourning began to wane. 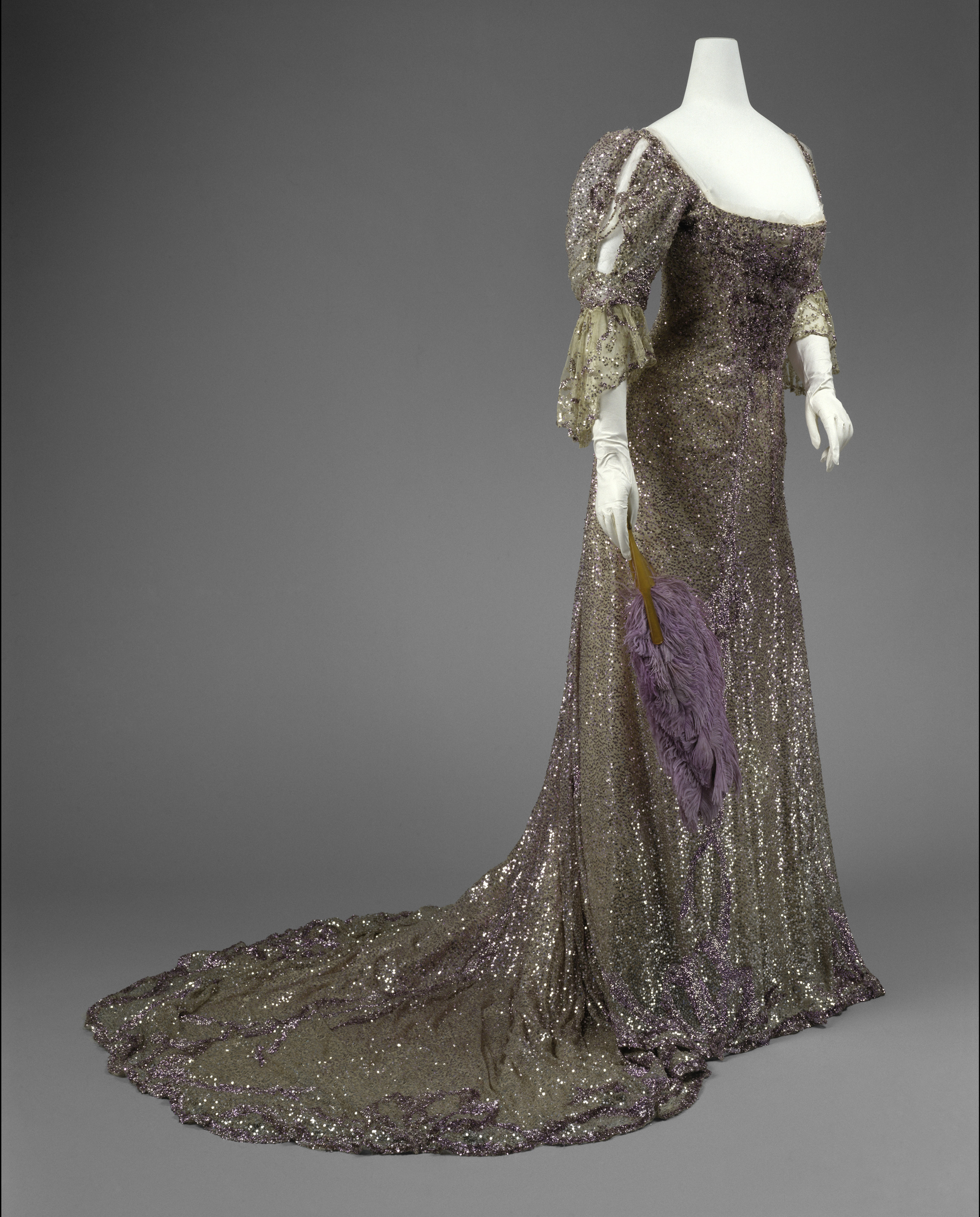 But, in America – long before Victoria’s death – the carnage wrought in The Civil War instigated a change in mourning.

Double the number of Southern soldiers died, leaving an enormous amount of people in mourning. The sight of the majority of women in black was considered depressing and bad for the morale of the grieving nation, which led to the rigid dress codes being gradually relaxed.

Nowadays, black mourning dress is only expected at funerals – though families often request that mourners wear bright, happy colors, to best celebrate the life of the deceased.

*Death Becomes Her is on at The Met’s Anna Wintour Costume Center from October 21, 2014 until February 1, 2015. Tickets cost $25 for adults, $17 for seniors and £12 for students. Members and children under 12 accompanied by adult get free admittance. 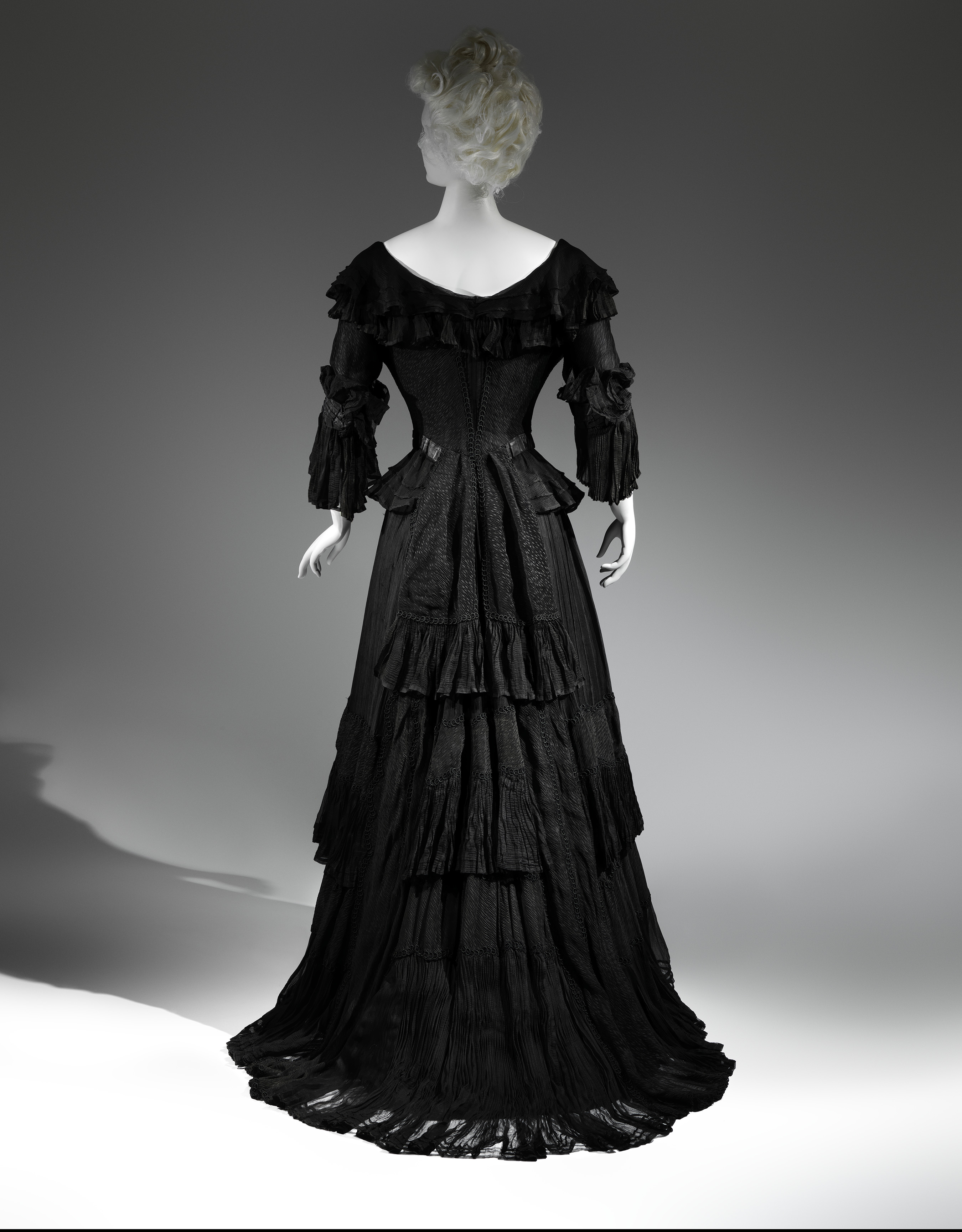 DEATH WATCH…This mourning dress, in silk crape, chiffon and taffeta dates from between 1902-1904